Figure 1: Schematic illustrating the use of a radar forward operator to calculate pseudo-observation based on the model output, which can be compared to radar observations.

Since a direct comparison between the models and radar observations cannot be performed, we use a radar forward operator, which calculates pseudo-observations based on the modeled atmospheric states (Figure 1). This allows us to evaluate the representation of cloud and precipitation systems in the respective model and create an observational basis for model improvement. The radar forward operator EMVORADO described in Zeng (2013), Jerger (2014), Blahak (2016) and Zeng et al. (2016) is used to compare the three dimensional precipitation radar measurements from the German radar network with the model simulations. We extended the non-polarimetric operator EMVORADO (restricted to reflectivities and Doppler velocities) to simulate also the pseudo polarimetric radar observations using the T-matrix method (Mishchenko, 2000). In Figure 2 polarimetric measurements from BoXPol are exploited to examine the representation of drop numbers and water contents in ICON2. Pseudo polarimetric radar observations using the ICON2 simulations are compared with so-called Quasi-Vertical Profiles (QVPs) based on BoXPol measurements at 18° elevation angle on on 26 April 2013 between 1200 and 1730 UTC. The methodology of QVPs was demonstrated in Trömel et al. (2014a) and further expanded in Ryzhkov et al. (2016). 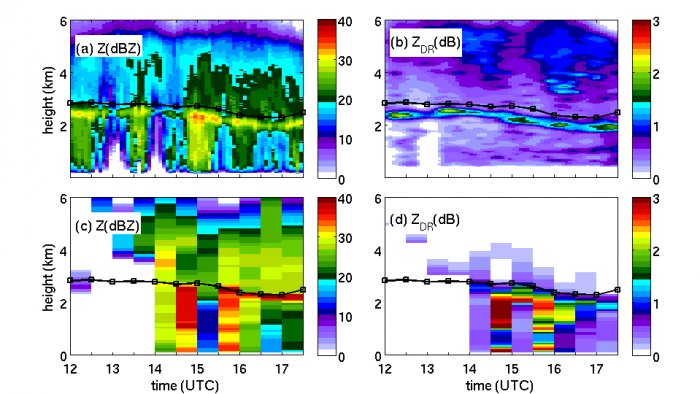 QVPs are especially beneficial for monitoring the temporal evolution of precipitating systems at a larger scale. The QVPs of the polarimetric radar variables are computed by azimuthal averaging of the data measured during standard conical scans at higher antenna elevation angles (18° in this case) and display the results in a time-versus-height format. The polarimetric radar BoXPol offers a detailed insight in microphysics of hydrometeors, like particle mean size and hydrometeor phase. In the QVPs, the melting layer between 1200 and 1730 UTC can be easily identified by the enhanced radar reflectivity (Z) and differential reflectivity (ZDR) between 2 km and 3 km (Figure 2, top panel). The environmental 0°C level predicted by the ICON model (black lines with square markers in Figure 6) follows the descent of the BoXPol observed melting layer (Figure 2, top panel). The pseudo polarimetric radar observations from the ICON simulations show a clear melting signature with Z and ZDR enhancement between 2 km and 3 km (Figure 2, bottom panel), which is consistent with the BoXPol observations. However, an overestimation of ZDR is found in the ICON2 simulations, with its values up to 3 dB, while in the QVPs ZDR is lower than 1 dB below the melting layer. ZDR is a measure of the mean particle size and does not depend on the concentration of the drops. While magnitudes of ZDR around 3 dB suggest raindrops of around 5 mm in diameter, 1 dB corresponds to diameters between 2 and 3 mm.Thus, the high ZDR below the melting layer is caused by the relatively low drop number and relatively high rain water content in the ICON2 simulations, which introduces a relatively high number concentration of large raindrops and finally results in an overestimation of the mean drop diameter.