Joint project between
University of Bonn and Deutscher Wetterdienst


Abstract
Operation Hydrometeors provides an efficient polarimetric forward operator required for the fusion of radar polarimetry and atmospheric modelling. The non-polarimetric forward operator (EMVORADO), used in Germans weather service models COSMO and ICON-LAM, will be extended to polarimetry assuming spheroids at precipitation radar wavelengths. This enables to generate synthetic volume scans of polarimetric observables based on the simulated model state and use it for evaluate and improve the hydrometeor (HM) types and size representation.
The evaluation with the state-of-the-art hydrometeor classification (HMC) schemes with modelled hydrometeors is challenging due to different hydrometeor type definitions and numbers and difficulties to identify dominant types in hydrometeor mixtures. Therefor, a dual strategy to evaluate the hydrometeor type representation in COSMO/ICON-LAM is suggested, based on advanced radar-based hydrometeor typing and a direct comparison of multivariate observed and synthetic polarimetric signal distributions.

The cluster-based hydrometeor classification (HMC) by Pejcic et al. (2021; HMC-Pejcic) enables us to determine, in addition to the dominant hydrometeor class, hydrometeor partitioning ratios (PR, Besic et al. 2018) defined as the relative mass contribution of a specific hydrometeor class. This extension is exploited for a more detailed evaluation of the representation of hydrometeors in ICON. HMC-Pejcic is a two-step method. In the first step, the Agglomerative Hierarchical Clustering (Ward et al. 1963) is applied to cluster the radar observations based on their similarity with respect to the five-dimensional observational state (i.e. the polarimetric variables horizontal reflectivity Zh, differential reflectivity Zdr, specific differential phase Kdp, cross-correlation coefficient hv and the non-polarimetric temperature indicator). After clustering, state-of-the-art HMC by Dolan and Rutledge (2009; HMC-Dolan) and Zrnic et al. (2001) adapted by Evaristo et al. (2009; HMC-Zrnic) are applied to specify the hydrometeor types of the clusters and to group them into hydrometeor classes comparable to the ones considered in the ICON model (Ice, Snow, Rain, Graupel, Hail and Wet Snow). In the second step, the centroids and the covariances from the multidimensional clusters are used to derive the hydrometeor PR for each hydrometeor class. In contrast to Besic et al. (2018), we use the multidimensional normal distribution instead of the exponential distribution required for the PR-determination. Thus, no synthetic data set and no parametrisation is required to derive the PR.


Figure 1 shows resulting profiles of dominant hydrometeor class fractional occurrence while Figure 2 presents the profiles of HM PR (melting snow is not shown) for a stratiform event with embedded convection. The mass-mixing-ratio-based ranking and the HMC of the synthetic observations reveal an overestimation of hail and graupel. In the model, snow predominates over ice up to higher altitudes (-20oC) compared to observations (-15◦C). First comparison of observed and synthetic polarimetric variables for each individual HM class show an overestimation of Zh and Zdr in rain. The comparison between graupel and snow reveals a much wider distribution for Kdp and Zdr for graupel than for snow.

Figure 2: Vertical distribution of HM class partitioning ratios for a stratiform event observed on 10 August 2017. The ICON partitioning ratios derived from the modeled mass-mixing-ratios (upper row) are shown together with the radar-based HMC-Pejcic retrieval (lower row). Overlaid black lines indicate the mean ratio at each height.

Our work during the first half of the project focused on extending DWD‘s operational radar forward operator (FO) EMVORADO, which can be online-coupled to the NWP models COSMO and ICON, with the capability to calculate polarimetric parameters (Zdr, ρhv, Kdp, Φdp, Adp, Ldr) based on the T-matrix method and to handle hydrometeors as spheroidal-shaped scatterers with shape and orientation as suggested by Ryzhkov et al. (2011). This includes all advanced features from the original FO (Zeng et al. 2016) such as automatic generation and use of efficient lookup tables, melting layer (based on the existing melting scheme by Blahak (2016)), effects of attenuation along the radar beam, beam function smoothing, an online ray tracing option and (partial) beam blockage effects.
EMVORADO’s primary goal is to provide synthetic observations for large radar networks in form of 3D volume scans, emulating the “real” individual scan strategies of each radar station. As intermediate step, (unattenuated) radar parameters on the NWP model’s grid can also be output. Simulating PPI-like (Plan Position Indicator) volume scans allows for example to derive Quasi-Vertical Profiles (QVPs) the same way as for the observations and thus enables direct comparisons between data from real and simulated observations. An example can be seen in Figure 3. 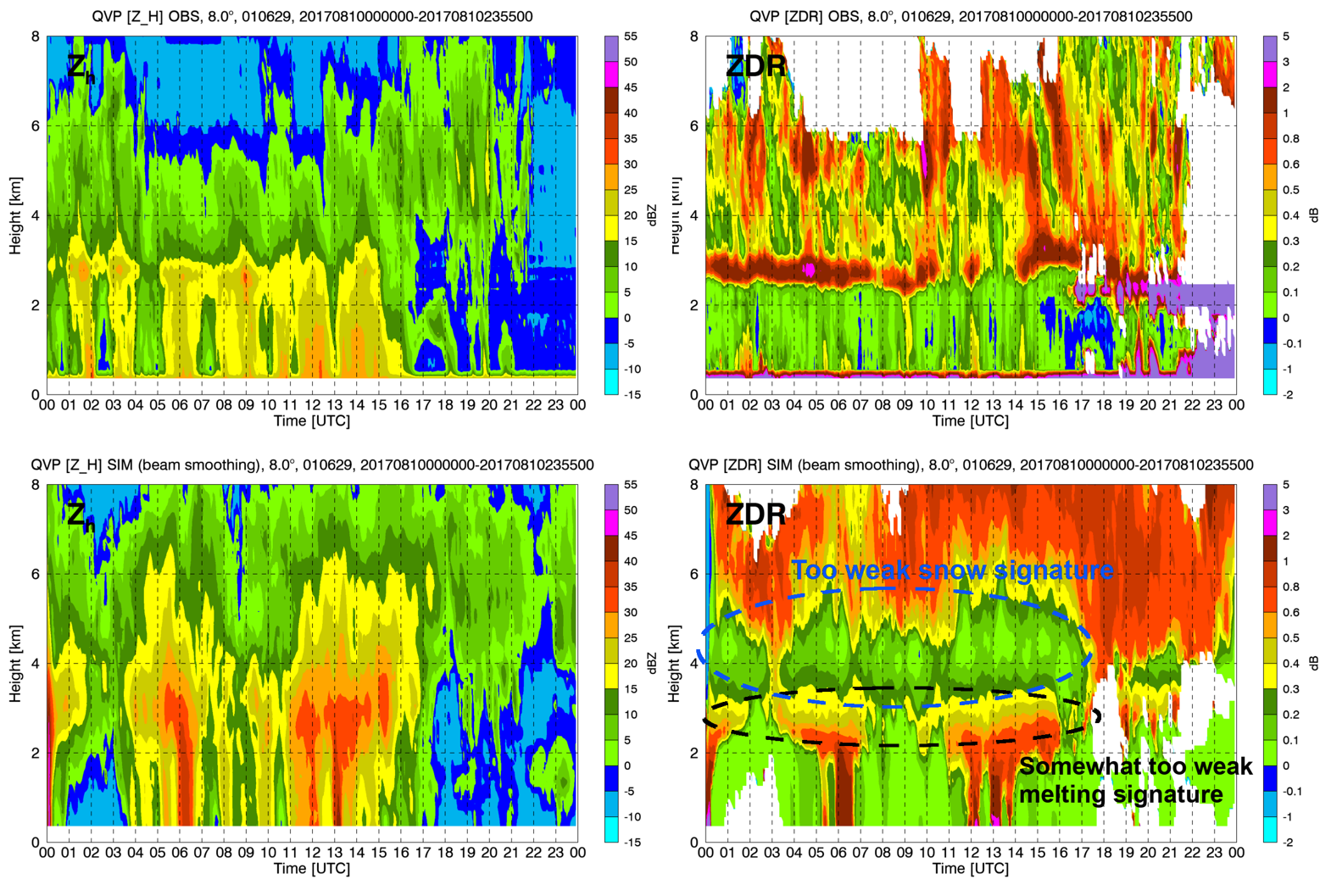 
An early version without the polarimetric lookup tables was released to PROM partners in January 2021 and the full version will be released along with the corresponding paper (Mendrok 2021). For online-coupling to COSMO and ICON, EMVORADO is directly compiled into the model binary and is therefore part of the git-repositories of both models [1], [2]. A stand-alone offline framework that accesses one time slice of model state variables from disk at a time is available from another git-repository [3].
The usage of lookup tables in EMVORADO is key to time-critical applications like data assimilation (DA) and to process large datasets for model evaluation, because, for example, runtimes for the simulation of the 16 German radars are reduced from the order of days to weeks (without lookup tables) to a few seconds.
Together with our project partners of University of Bonn (see above) and in close collaboration with the ILACPR project, the polarimetric FOs EMVORADO and B-PRO (Xie et al. 2021) have been applied to simultaneously study the impact of uncertainties in model microphysics, retrievals, and forward operators on model evaluations (Shrestha et al. 2021).
These studies revealed serious limitations of the spheroidal particle assumptions as made in order to apply the T-matrix scattering method. Specifically, the polarimetric signatures of “fluffy'', low density particles like dry snow aggregates are seriously underestimated, as can be seen in Figure 3 in the possibly snow-dominated region above the melting layer (blue annotation) and as explained by Schrom and Kumjian (2018). Other state-of-the-art polarimetric FOs (e.g. Matsui et al. 2019; Oue et al. 2020) suffer from similar issues. Also, melting-layer signatures in Zdr were found to be somewhat weak and too-low-in-altitude (black annotation), a problem that will be tackled during the remainder of the project.
To this end, the synthetic radar variables are compared to the observations from X- and C-Band radars during longer time periods (several days). To keep the model states as close to the observations (which is very important), we assimilate meteorological standard observations, radial wind and reflectivity into an hourly ICON-KENDA LETKF data assimilation cycle instead of just doing free forecasts.

The work in the first year addresses the selection of convective and stratiform case studies (WP 1) as the useability of common hydrometeor classification schemes for model evaluation (WP 2) and the coding of clustering routine (WP 3). At the same time spheroids will be consolidated in EMVORADO based on existing code (WP 4) and an automatic generation mechanism of lookup tables for efficiency will be introduced (WP 5).


Contribution of University Bonn
A first goal of the University Bonn contribution to Operation Hydrometeors was the selection of case study days (convective and stratiform) and to apply hydrometeor classification schemes (HMC) for model evaluation to the selected events to build a reference (in preparation of WP 3) for the advanced radar-based hydrometeor typing (Grazioli et al. 2015, Besic et al. 2016). Conventional HMC suffer from: Uncertain of hydrometeor (HM) class properties defined by theoretical scattering simulations especially in solid phase (Tyynetla et al 2011), impact of radar observation accuracy on HM typing (Park et al. 2009), less represented HM class identified as dominant in HM mixtures due to disproportional impact on polarimetric variables. Furthermore, HMC schemes have different a-priori class definitions and numbers. Even the same classes of different HMC can be defined by different polarimetric properties, making comparability with modelled HM even more difficult. A direct comparison between modelled and measured variables cannot be made due to temporal and spatial shifts. Therefore, distributions of hydrometeors of several hours/days or of whole system evolutions are compared statistically. It also has to be investigated whether HMCs should be applied to gridded polarimetric moments or gridding of HMC output achieves more reliable results.

An in-depth evaluation of these problems has not been done so far and we present and discuss the first results of these. The three selected radar-based classifications are those according to Dolan and Rutledge (2009) [HMCDR], Zrnic et al. (2001) adapted by Evaristo et al (2013) [HMCZE] and Thomson et al 2014 [HMCT]. The first is more for warm season and convective cases, HMCZE is for general cases and the third one is applicable to more stratiform winter precipitation. For example Figure 1 shows the differences of the HM typing in class definition and numbers, observed by the X-band radar in Bonn at 2013.07.01 at 15:40 UTC, which make a comparison with the six HM types (cloud water, rain, cloud ice, snow, graupel and hail) in COSMO/ICO-LAM challenging. Note also that each HMC also differs slightly in its methodology. For example, the HM can be classified with simple (Dolan and Rutledge 2009) or bivariate (Zrnic et a.l 2001) membership function. Thompson et al. 2014 first detects the melting layer that divides the precipitates into liquid, solid or mixed and afterwards classifies these regimes independently of each other.

Figure 1: Two-dimensional projection of horizontal reflectivity against differential reflectivity for the comparison of three HMC typing (left: HMCZE, middle: HMCDR, right: HMCT) applied on the data set of one RHI scan (2013.07.01, 15:40 UTC) of the X-band radar in Bonn (BoXPol). The colors indicates the specific HM types of the three different schemes

Regarding the impact of the accuracy of radar measurements on HM typing in 100 realizations the polarimetric measurements of an event (2016.06.20 15:30 UTC) are perturbated with an error. For this purpose, we calculate the standard deviation (Ryzhkov and Zrnic 2019) of the error for each polarimetric variable, add a random perturbation from the associated Gaussian distribution to the measurements and determine the HM type with the disturbed measurements. The figure 2 shows the distributions of the HM types resulting from measurement disturbance for a given HM type from undisturbed measurement. Basically, measurement inaccuracies can result in misclassification of any HM type, but the probability that a certain type occurs depends on the HM class and HMC scheme.
Mainly measurements classified by HMCDR with No Rain are very often misclassified as Drizzel/Light Rain. In HMCZE No Rain is often misclassified with Light Rain and Light rain with Dry/Wet Snow and Crystals. Measurement inaccuracies at HMCZE lead to the fact that the misclassification takes place particularly strongly within the ice phase. With HMCDR, liquid HM are very often classified as wet snow. 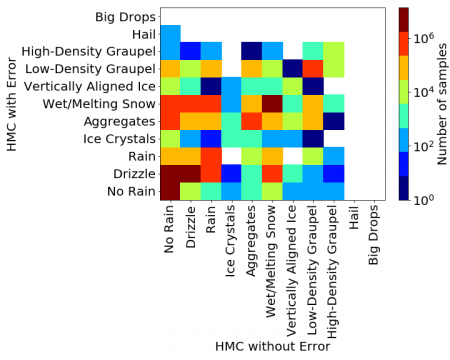 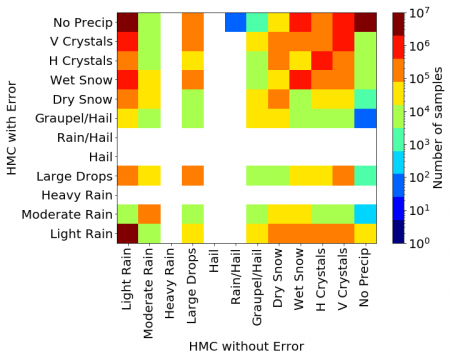 Figure 2: Two-dimensional distribution of the HM types determined with Dolan and Rutledge 2009 (left) and Evaristo et al. 2013 (right) with 100 realizations applied to a PPI scan from 2016.06.20 15.30 UTC with perturbated polarimetric variables


Contribution of Deutscher Wetterdienst
Work in the first year focused on extending DWD‘s operational radar forward operator (FO) EMVORADO, that can be online-coupled to NWP models COSMO and ICON, with the capability to calculate polarimetric parameters and to handle hydrometeors as spheroidal-shaped scatterers (WP-4). A prototype, based on third-party code (J. Snyder, NOAA), has been implemented. Spheroid shapes and orientations, which are not constrained by the NWP models, follow parametrizations given in Ryzhkov (2013), and scattering properties are derived using a T-Matrix approach. This implementation will serve as a basis for a refined, consistent implementation of EMVORADO-Pol flexible enough to handle arbitrary shaped and oriented particles for all hydrometeor classes (in preparation of WP-18).

Before further EMVORADO-Pol development, including the implementation of polarimetric lookup tables (WP-5), we are consolidating bulk microphysics and bulk scattering implementations in EMVORADO in order to handle 1- and 2-moment microphysics consistent in the FO (and avoid error-prone and hard-to-maintain duplicated code). Additionally, the University of Bonn has been supported by debugging and improving parts of their – in wait for EMVORADO-Pol - currently applied polarimetric forward operator BPFO. Furthermore, some sensitivity analyses (e.g. of the melting parametrization, see Figure) and comparison to a third polarimetric forward operator (J. Carlin, NOAA) have been performed with BPFO in the framework of evaluating melting layer and frozen hydrometeor microphysics in COSMO (early contributions to WP-14,15,19). 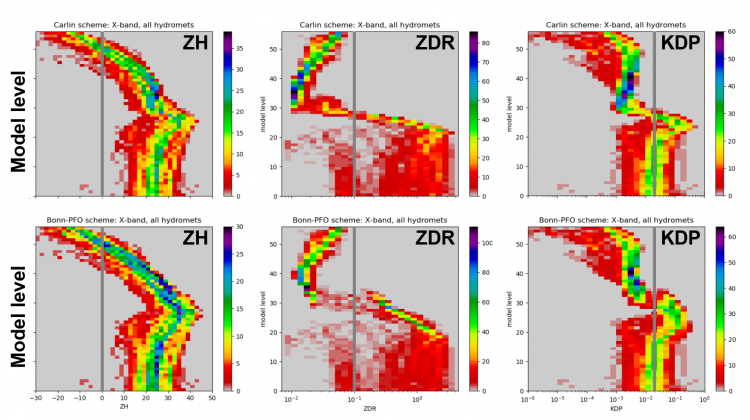