Current research aims at the development of a method that retrieves Kdp in the gates affected by wind turbines in case. The differential phase shift (ɸDP) is the phase difference between the received horizontal and vertical polarized waves. Since raindrops are oblate (horizontal axis larger than vertical axis), in a medium filled with rain ɸDP is positive and monotonically increasing. The basis of the method relies in the fact that the wind turbine causes a jump in ɸDP similar to the jump caused by backscatter differential phase δ in case of Mie scattering by large particles. This effect is recognized and several filters exist to separate the δ contribution from ɸDP. We chose to use a filter by Hubbert and Bringi (1995). After filtering ɸDP from the contribution of the wind turbine, we calculate its range derivative Kdp (specific differential phase), which provides information on the amount of raindrops in a certain range. Kdp is an important radar derived variable, used for instance in the retrieval of rain rates, and in self-consistency radar calibration methods. When a scan of Kdp is plotted, the result doesn’t seem to be affected by the wind turbines, but further investigation is needed. One way to validate the quality of radar data is to compare the derived rain accumulations with direct rainfall measurements from rain gauges. Validation will be a very important step in this project in order to be certain that the radar variables we reconstruct are reliable.
In a second step we attempt to reconstruct also the other important polarimetric radar variables. Many other radar applications (hydrometeor classification, nowcasting, radar data assimilation) require Zh and Zdr, which are affected by the presence of wind mills. Under certain circumstances, the 3 moments Zh, Zdr and Kdp are not independent, and the redundancy in the information provided by them can be used to retrieve Zh and Zdr from Kdp. Some relationships between those have been investigated and are available in the literature, for example in Lim et al. 2013 (Zh-Kdp relationship) and Gourley et al. 2009 (Zh-Zdr-Kdp relationship). 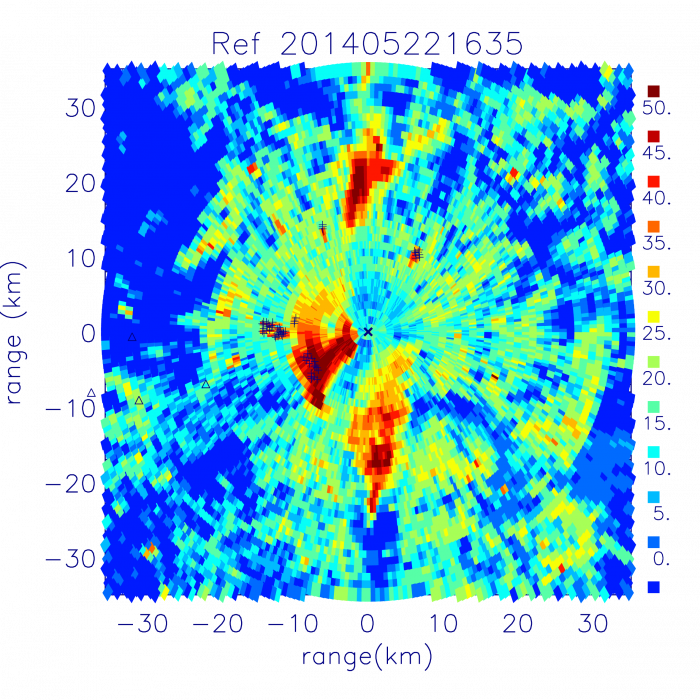 Figure 1. Raw reflectivity from the DWD radar in Boostedt at an elevation of 0.5°. Crosses show the locations of the closest wind mills. Reflectivity is enhanced at these sites. Some rains cells are visible in the south, southwest, and to the north of the radar. 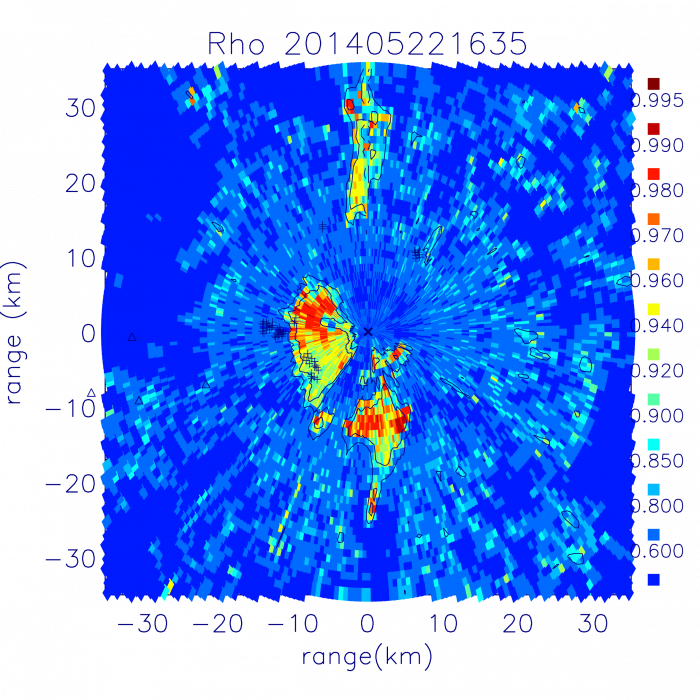 Figure 2. Correlation coefficient corresponding to the reflectivity in Figure 1. The low values indicate non-meteorological scatterers (ground clutter, biological scatterers, debris, …). In this example wind farms show low values of RhoHV, except in the southwest, where rain is falling over the wind turbines. 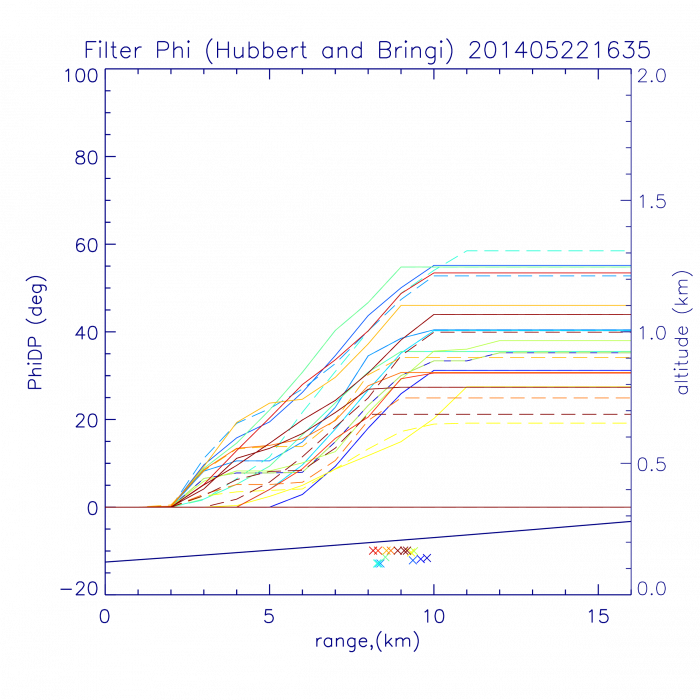 Figure 3. PhiDP plotted in a few radials across the wind farm where the rain is falling to the southwest. This PhiDP is already processed using the filtering method from Hubbert and Bringi, 1995. The colored X's represent the range and altitude of the wind turbines. The blue line just above is the altitude of the center of the radar beam. 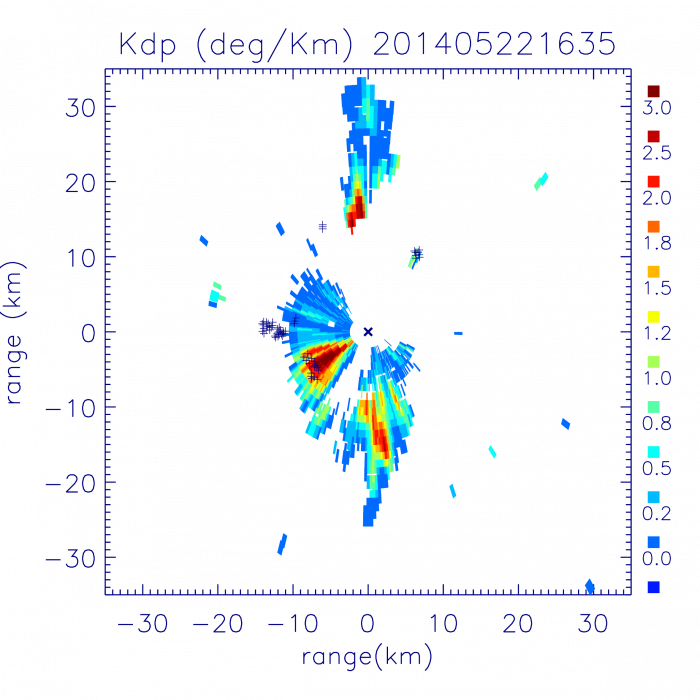 Figure 4. PPI of KDP calculated using the PHIDP processed as in Figure 3. KDP is only calculated in gates where RhoHV is greater then 0.85. Note that the wind turbines with no rain do not have any KDP signal, and the ones that do have rain do not seem to have a KDP higher than the surrounding area. 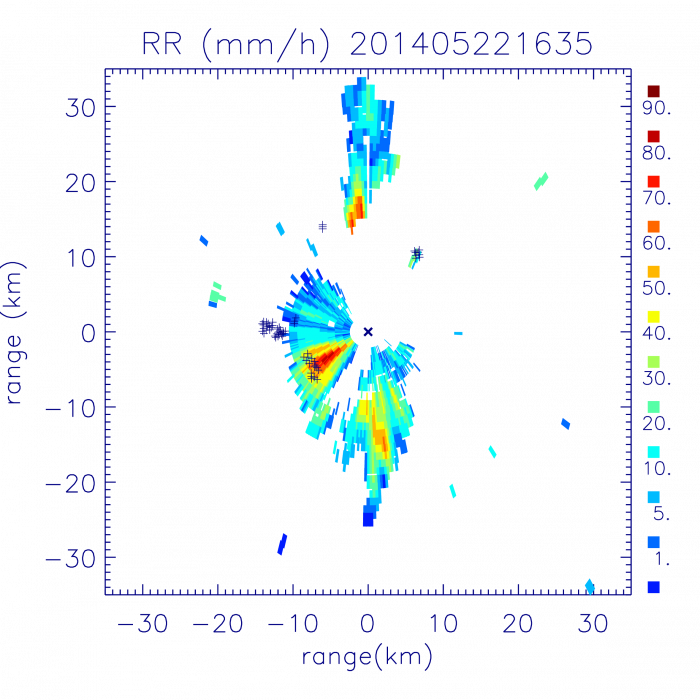 Figure 5. Rain rate calculated using RR= 29.445 KDP^0.801 in gates where RhoHV is greater then 0.85. Similarly to Figure 4, the wind turbines with no rain have a 0mm/h rain rate, and the ones that do have rain do not seem to enhanced values compared to the surrounding area. 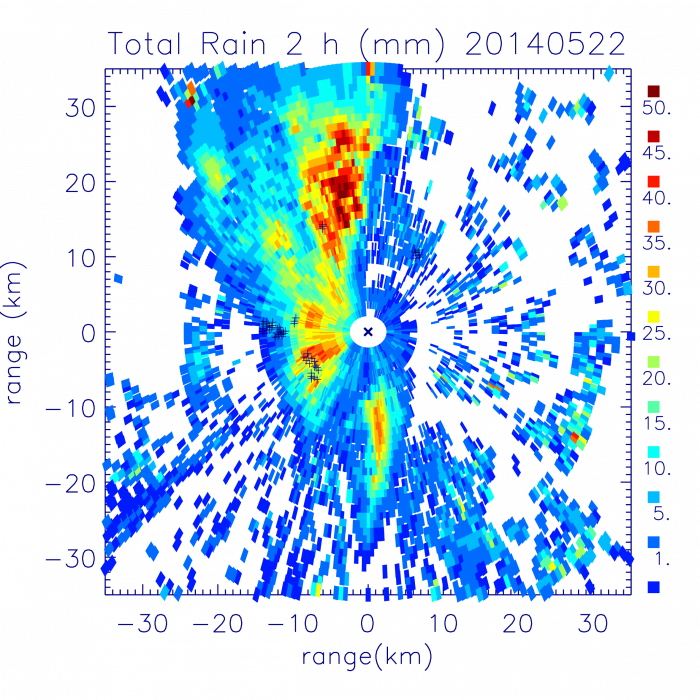 Figure 6. Rain accumulation in 2h using the rain rates as in Figure 5. No apparent rain enhancements are seen in the wind turbines locations.