Abstract
Aim of the project is to exploit the synergy of two full polarimetric radars, the C-band POLDIRAD at DLR, Oberpfaffenhofen and the Ka-band miraMACS (Mira35) at LMU, Munich, to study convective initiation as well as ice particle growth and its role in precipitation formation. At a distance of 23 km between DLR and LMU the use of the two research radar systems allows targeted observations and coordinated scan patterns. In order to study life-cycles of convective cells or precipitation development (e.g. fall streaks), object tracking is applied using horizontal PPI and vertical RHI cross sections on or close to the line-of-sight. An ice particle size retrieval will be developed for the dual-wavelength radar measurements, which will be used to advance established polarimetric hydrometeor classifications. Other processes observable are drizzle formation, cloud glaciation, distinction between depositional growth of small ice particles and onset of quicker ice particle growth into precipitation sized particles by aggregation, and initiation of first precipitation at the surface. Timing of these processes and their spatial distribution are observed and compared to modeled processes. Using a numerical weather model (WRF) with a nested domain centered over Munich at high spatial resolution (∆x of around 100 m), it is analyzed how microphysical parameterizations of different levels of complexity compare to the observations.

Logarithmic difference of radar reflectivity measurements from POLDIRAD (DLR Oberpfaffenhofen) and MIRA35 (miraMACS, LMU Munich), defined as Dual-Wavelength Ratio (DWR, e.g. Kneifel et al., 2011) provides information about the size of the observed hydrometeors. For the dual-wavelength measurements, two different scan strategies have been developed. During stratiform precipitation events, POLDIRAD and Mira35 performed RHI scans every 10 minutes covering the area between them (on-axis scans). However, for convective precipitation formation a setup has been developed focusing dual-wavelength RHI scans freely on interesting precipitation cells (off-axis scans). Both types of measurements produced a first dataset for retrieval of ice particle microphysical properties from DWR measurements (about 20 measurement days on-axis and 10 off-axis). Using snow events from this dataset in order to avoid strong attenuation effects in the Ka-band, a preliminary estimation of the size of the ice particles has been attempted. To this end, dual-wavelength measurements have been evaluated along with T-matrix scatter simulations for particles that follow Gamma function shaped size distributions, varying aspect ratio with size, and a constant density (Fig. 1). 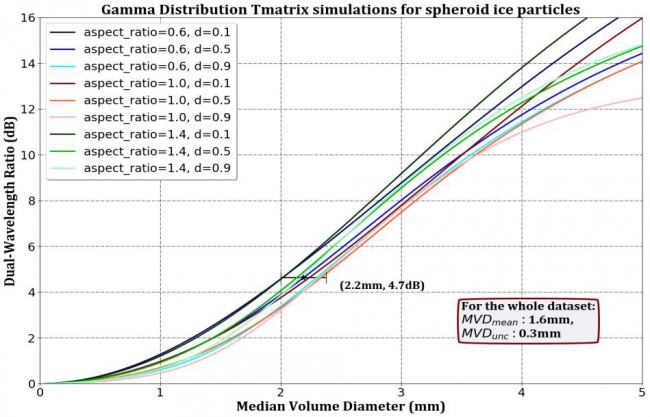 Since July 2019 no further dual-wavelength measurements have been performed as POLDIRAD was dismounted and is currently located on Barbados for the EUREC4A research field campaign (Bony et al., 2017). Therefore, recently the focus was layed onto analysis and processing of the data collected before. Ewald et al., 2019 found an underestimation of ca. 4 dB in the measured radar reflectivity after calibration and characterization of the Ka-band cloud radar HAMP on board HALO aircraft (also a MIRA35). This correction now applied to the Mira35 data leading to results shown in Figure 2. In addition, in the Ka-band attenuation due to atmospheric gases and hydrometeors have to be considered for an accurate extraction of information from the observations and a realistic retrieval. Gaseous attenuation can be calculated using ITU-R P.676-11 line-by-line formulas (ITU, 2016) and atmospheric parameters from ECMWF database. For hydrometeor attenuation, different formulas from literature have been tested finally yielding satisfying results (also Fig. 2). However, experiments for the optimum calculation of the attenuation from different hydrometeors at Ka-band are currently ongoing. Attenuation effects at C-band (gaseous and hydrometeors) are neglected up to now. 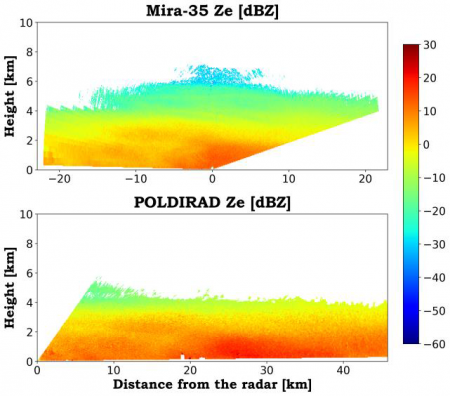 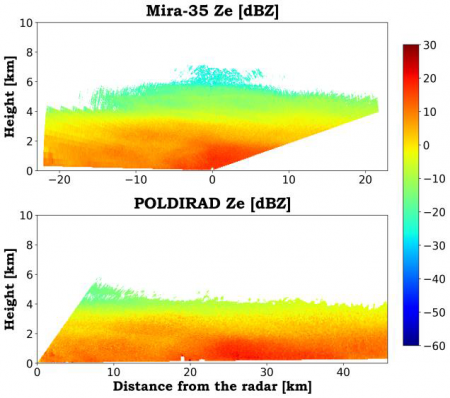 Partner LMU: The life-cycle of cloud and precipitation microphysics in radar observation and numerical model

At the LMU polarimetric and dual-wavelength measurements are used to analyze and improve the performance of microphysics schemes in WRF. A simulation setup has been established including a Europe-, a nested Germany- and a nested Munich-domain. The Munich domain covers the overlap area of our two radars Mira35 and PoldiRad with a horizontal resolution of 400 m. This allows the simulation of convective events, which is the focus of our interest. For each of our measurement days (10 days with about 100 cell observations), a WRF hindcast simulation is conducted with differing microphysics schemes. Up to now, the Thompson- (Thompson et al., 2008), Morrison- (Morrison et al., 2009) and Thompson-aerosol-aware (Thompson and Eidhammer, 2014) 2-moment bulk schemes were used. We plan on adding a P3 (Morrison and Milbrandt, 2015) and a spectral bin (Fan et al., 2012) scheme in the near future.
To compare the radar observations to the WRF model output, the radar forward-simulator CR-SIM (Oue et al., 2019) was implemented. Figure 3 shows a first example of one of the measurement days simulated with WRF/ CR-SIM. In this example, CR-SIM was simulating the DWD C-Band radar in Isen. Finally an analysis of the microphysics schemes’ performances will be performed statistically over a large dataset including all our measurement days and convective cells. To make such a statistical comparison between radar measurements and WRF simulations possible, currently an automated cell tracking algorithm is implemented that allows tracking of convective cells over their life-cycle in model and observation. At the moment the algorithm TINT (Fridlind et al, 2019) is used to this end, which was specifically developed for cell tracking over large datasets. 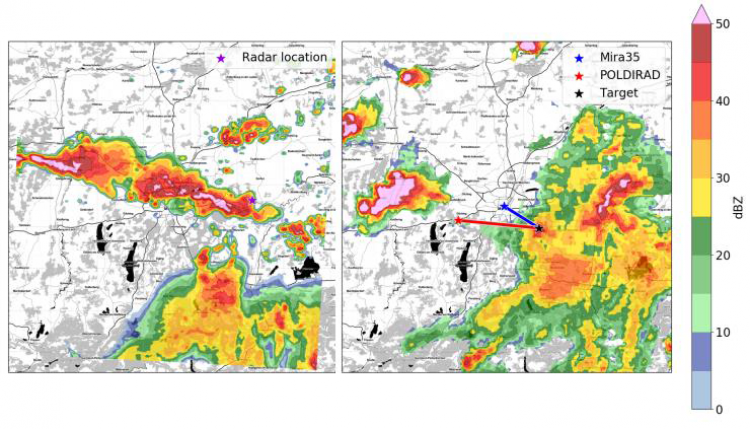 Figure 3: Situation at 1st of July, 13 UTC. Left: Horizontal polarized reflectivity (Zhh) of a WRF simulation using the Thompson 2-moment bulk scheme and after forward-simulation using CR-SIM. The simulated radar is the DWD C-Band radar located in Isen. Right: Reflectivity measurement of the DWD C-Band composite. The blue line is the measurement direction of our Ka-Band radar (Mira35), the red line is the measurement direction of our C-Band radar (PoldiRad).

Morrison, H. and Milbrandt, J.A. (2015). Parameterization of cloud microphysics based on the prediction of bulk ice particle properties. Part I: Scheme description and idealized tests. Journal of the Atmospheric Sciences, 72(1), pp.287-311.