Joint project between
Deutscher Wetterdienst, DWD and University of Cologne


Abstract
Especially for ice- and mixed-phase clouds some of the fundamental details of the ice microphysical processes such as depositional growth, aggregation, riming, secondary ice generation, or melting are poorly understood. The goal of IMPRINT is to improve our ice microphysical process understanding and their representation in numerical models using multi-frequency spectral Radar polarimetric observations and Monte Carlo Lagrangian particle modelling linked by a novel polarimetric 1D radar forward operator.

Current status
Contribution of University of Cologne
The contribution from the University of Cologne focuses on multi-frequency spectral Radar polarimetric Observations and the polarimetric 1D radar forward operator. The first of two proposed winter campaigns (TRIPEx-pol) took place in Jülich from 1st Nov. 2018 until 19th Feb. 2019. During the campaign, vertically pointing X-Band, Ka-Band and W-Band Doppler radars as well as a scanning polarimetric W-Band radar were installed at the Jülich ObservatorY for Cloud Evolution – Core Facility (JOYCE-CF) (see Figure 1).

These measurements were complemented by the two polarimetric X-Band radars stationed in Bonn and the Sophienhöhe and by 20 Radiosondes launched during the campaign. A first look at the dataset shows that the measurement setup is capable to capture ice microphysical processes: the polarimetric moment differential radar reflectivity ZDR in Figure 2 shows aggregation at around 14-16 UTC below 3000m (small values of ZDR), whereas the enhancement of the differential specific phase shift KDP in the same period indicates the presence of small, asymmetric particles. The spectral ZDR and spectral dual-wavelength ratio DWR Ka-W allow to look at the smaller particles present (to which the moments of ZDR and Ze are insensitive as soon as larger particles dominate the signal). Looking at Figure 3, the spectral DWRs clearly indicate aggregation in the height region associated with temperatures between -10 and -8°C. The Doppler spectra also show a widening just below -16°C, which might indicate secondary ice production at this height. Simultaneously, the spectral ZDR shows a large amount of small particles appearing below -16°C, that can be consistently observed in the measurement volume down to the ground.

In order to get the most information from the available dataset, it is currently reprocessed and quality-controlled following the approach described in Dias Neto et al 2019. Furthermore, nested, high-resolution ICON-LEM simulations have been conducted for the entire campaign. The multifrequency radar moments forward modeled with Pamtra such as the equivalent radar reflectivity factor Ze or the mean Doppler velocity show a good agreement with the observations and provide a good starting point for analysing the ice microphysics implemented in the model.


Contribution of Deutscher Wetterdienst (DWD):
At DWD the main focus is to improve cloud and precipitation schemes in atmospheric models based on process fingerprints detectable in polarimetric observations. While bulk microphysical schemes often lack details because of generalizations, Monte-Carlo Lagrangian particle models (LPMs) allow avoiding intrinsic errors caused by such assumptions. The DWD-developed LPM McSnow (Brdar and Seifert, 2018) allows the straightforward implementation of the current knowledge about microphysical processes and provides a way to track the growth history of particles. One key assumption still exists in analytical or empirical mass to diameter relationships that try to generalize particle habits and therefore determine their sedimentation velocity.

By extending McSnow to allow the natural development of ice habits by depositional growth and riming, we eliminate these relationships (at least for primary ice particles) and can constrain the behavior by comparing the particle shape to the large polarimetric signal typically caused by the asymmetry of ice crystals. Since the manifoldness of ice crystal shapes is sheer endless, we assume them to be oblate or prolate spheroids. Figure 4 shows the influence of the ice habit on the mass of a particle after 10 minutes of depositional growth at constant temperature and water saturation. The comparison with wind tunnel measurements makes it apparent that the assumption of a spherical particle greatly underestimates ice mass and illustrates the need for an explicit habit consideration to capture the temperature-dependent growth regimes.

The initial conditions at nucleation are important for the development of the particle, since they crucially influence mass, shape, and lifetime. An example of the variability invoked by the ice habit is shown in Figure 5. Identical particles were nucleated every 5 meters in an idealized atmosphere. Depending on the conditions at nucleation, the individual lifetime differs strongly (first plot). The lifetime is determined by the particle shape (third plot; Φ < 1 plate-like, Φ > 1 column-like) which strongly influences ice mass and sedimentation velocity (second and fourth plot).

Further extensions to the model are habit specific riming that allows the formation of graupel from columns, and plates, a habit-specific aggregation process, as well as secondary ice production mechanisms like rime splintering and freezing fragmentation. 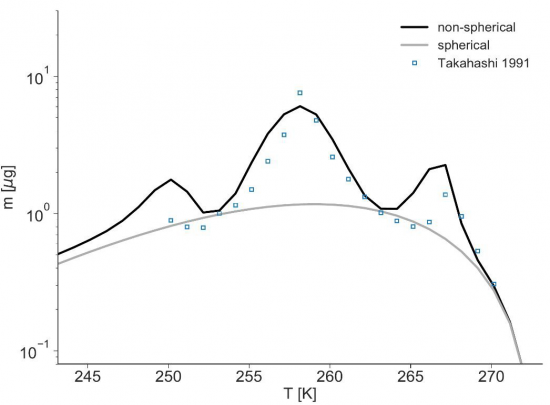 Figure 4: Temperature-dependent mass growth after 10 min of vapor deposition. The black line shows the results for a crystal that can grow asymmetrical, grey line for a spherical crystal. Blue open squares are measurements from Takahashi et al. (1991).