Polarimetry Influenced by CCN aNd INP in Cyprus and Chile (PICNICC)


Abstract
PICNICC’s goal is to improve our understanding of aerosol effects on microphysical growth processes in mixed-phase clouds. Based on a combination of radar polarimetry, dual-frequency Doppler radar and lidar observations from a clean, pristine site in Punta Arenas (Chile, 53°S,71°W) and an aerosol-burden site in Limassol (Cyprus, 35°N,33°E ), the contrasts in the microphysical fingerprints of mixed-phase clouds, specifically of pristine ice formation, riming and aggregation, are studied. The investigations are supported by high-resolved numerical weather simulations using the ICON-NWP model with 2-moment microphysics, which are used to evaluate the impact of aerosol variations on cloud microphysics over the two field sites. Polarimetric, Doppler-capable radar forward operators, such as PAMTRA or CR-SIM, will be used to transfer the simulation results into observational space.

Our main hypothesis is, that the availability of ice nucleating particles (INP) drives the process by which ice grows in clouds in the temperature range between 0°C and -40°C, where liquid water can be present. When high concentrations of INPs are available, we expect clouds to glaciate at higher temperatures (Seifert et al., 2010; Kanitz et al., 2011), leading to aggregation being the dominant growth process. Opposed to this, if there is a scarcity in INP, liquid water layers will be more persistent. As a result, riming will occur more frequently than in high-INP conditions. Fig. 1 summarizes the proposed hypothesis in a schematic.

Figure 1: Schematic of the PICNICC hypothesis: Large concentrations in INP (mainly dust) lead to a higher ice fraction in clouds, thus promoting growth by aggregation. When INP concentrations are low, more supercooled liquid water will be present in the clouds, and riming will occur more frequently

A new algorithm was implemented to determine the Vertical Distribution of Particle Shape (VDPS) in a cloud, using Range Height Indicator (RHI) scans from 90° (zenith pointing) to 150° elevation angle of the Slanted Linear Depolarization Ratio (SLDR) and the cross-correlation coefficient (ρcx),shown in Figure 1(b) and 1©, which are sensible to the shape and orientation of particles, respectively (Myagkov et al., 2016). From the elevation dependency of these two parameters and assuming that the hydrometeors are oriented horizontally along their long axis, the microphysical parameter polarizability ratio (i.e., density-weighted aspect ratio) can be derived as a function of height. A polarizability ratio ξ = 1 describes isometric particles (illustrated in Figure 1(e) with the dashed red line), while ξ < 1 and ξ > 1 describe oblate and prolate particles, respectively. The particularity of this new approach is the combination of a spheroid scattering model with polarimetric measurements. The new method was applied to data from two field campaigns (CyCARE in Limassol, Cyprus, and DACAPO-PESO in Punta Arenas, Chile, Radenz et al., 2021) and is prepared to run automatically. This vertical distribution of the particle shape in a cloud is a new way to understand processes like riming and aggregation, as either one of these processes in general contribute to a vertical change of microphysical properties.

A novel machine-learning-based method to predict the rime fraction from features contained in cloud radar Doppler spectra has been successfully developed (Vogl et al., 2021, AMTD). Artificial neural networks (ANNs) were trained using data from the Finnish site Hyytiälä, where ground-based remote sensing instruments were collocated with in-situ sensors measuring snowfall. The ANN-based method, which uses the radar reflectivity, the spectrum skewness and the width of the spectra above the noise floor as input, was shown to be applicable for the Punta Arenas site. This method does not rely on the mean Doppler velocity (MDV), which is, in Punta Arenas, strongly influenced by orographic waves and thus cannot be used to detect riming. The successful development of this riming retrieval is an important prerequisite towards the objective of the project to distinguish between aggregation and riming. The next steps will be to apply the method to longer-term observations both for the Chilean (DACAPO-PESO, Punta Arenas) and the Cypriot (CyCARE, Limassol) sites and compare the results statistically. Furthermore, ICON simulations are being prepared and will be performed in the near future. The ICON model will be run using two nested grids (2.5 and 1.25 km horizontal resolution respectively), and the rime fractions of each hydrometeor type are computed (diagnostic variables). The meteogram output of selected points close to the measurement site will be used as input to the Passive and Active Microwave Transfer model PAMTRA (Mech et al., 2020)

Figure 1: Illustration of (a) the time-height plot of reflectivity measured by the W-Band radar at Punta Arenas, Chile, on 11 September 2019, RHI-scans at 3:30 UTC of (b) SLDR and © the cross-correlation coefficient, (d) the ANN-based riming retrieval, (e) the VDPS-based retrieval and (f) the height spectrogram of cloud radar Doppler spectra at 3:30 UTC.

The developed approaches can be combined to obtain a better understanding of riming and aggregation processes. This is first done for selected case studies, and can in the future be extended to a statistical analysis. A selected case study is shown below to demonstrate the performance of the two newly developed techniques, and to present potential synergies of the two approaches. The case was observed on 2019-09-11 at Punta Arenas, Chile during the DACAPO-PESO field campaign (https://dacapo.tropos.de/). Figure 1(a) shows the time-height plot of reflectivity measured by the W-Band radar in Punta Arenas between 1 :30 and 5:00 UTC. A high ice cloud merges with mid-level layer clouds, leading to precipitation (rain) between 2:45 and 4:30 UTC. The ANN-based riming retrieval (Figure 1(d)) predicts riming for the height range between approximately 3.5 and 5 km, between 2:45 and 3:30 UTC. The height spectrogram of cloud radar Doppler spectra for 3:30 UTC (Figure 1(f)) reveals that liquid water is present up to an altitude of 5 km, corroborating the prediction of the ANN. In Figure 1(b) and 1©, RHI-scans of SLDR and ρcx are performed with a SLDR-mode scanning cloud radar used during the campaign and show a vertical stratification of the cloud where different microphysical processes can occur. The vertical distribution of the polarizability ratio (Figure 1(e)), illustrates a stable layer of oblate particles from 5 to 8km (ξ < 1), where particles precipitate into the riming layer detected by ANN between 3.8 and 5km, due to the presence of supercooled liquid droplets, and becomes more and more spherical producing graupel particles from 2.5km to 3.8km (ξ = 1). The ANN is able to detect riming while the VDPS method allows us to observe graupel particles producing by riming processes. The combination of these two methods add important information for the differentiation of riming and aggregation processes.


Status Update from 2020
The DACAPO-PESO field experiment (short for Dynamics, Aerosol, Cloud and Precipitation Observations in the Pristine Environment of the Southern Ocean) has started in December 2018 (Check out our blog! https://dacapo.tropos.de/). The campaign is a collaborative effort between TROPOS, University of Leipzig and the University of Magallanes, Punta Arenas. The installed instrumentation is the Leipzig Aerosol and Cloud Remote Observations System (LACROS) of TROPOS (Bühl et al., 2013), which comprises a 35-GHz cloud radar Mira-35, a multiwavelength-Raman-polarization lidar Polly-XT, Doppler lidar, microwave radiometer, disdrometer and radiation observations. A W-band radar from University of Leipzig was employed at the site, in addition, until September 25, 2019, meaning that almost 9 months of dual-wavelength observations are available. The operation of LACROS in Punta Arenas will be continued until April 2020. 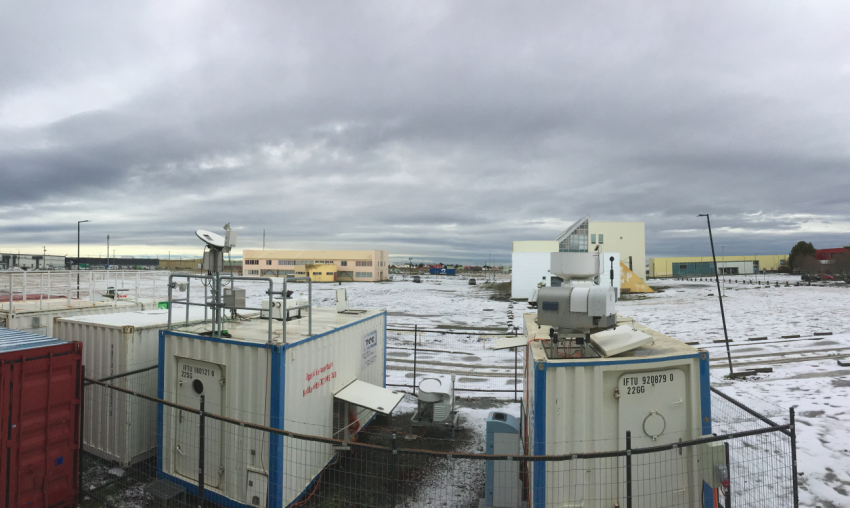 The detection of riming and aggregation processes is the first step required to analyze the differences in ice growth mechanisms between the two sites of Punta Arenas and Limassol. Cloud radar Doppler spectra contain useful information about the hydrometeor populations which are present in the radar observation volume. We want to take advantage of this connection to detect dominant microphysical ice growth processes. Especially riming can be evident from the cloud radar Doppler spectra: Supercooled liquid water droplets have fall velocities close to zero, while rimed particles fall at a considerable speed, which is significantly higher than e.g. for fluffy aggregates. Figure 2 shows an example for observed riming fingerprints in the radar reflecitivity (left panel) and the cloud radar Doppler spectra. The reflectivity time-height plot shows signatures of high-reflectivity “streaks” in higher cloud regions coinciding with the time of strongest precipitation. A range spectrogram plot at 14:22 UTC (top right panel) reveals a layer of supercooled liquid water (SLW) present (i.e. a mode with fall velocity around 0 m/s) between 2500 and 4000 m altitude. Below the SLW layer, the reflectivity increases. An example Doppler spectrum from 2800 m altitude reveals that two modes of ice particles are present in the same volume as the supercooled cloud droplets. 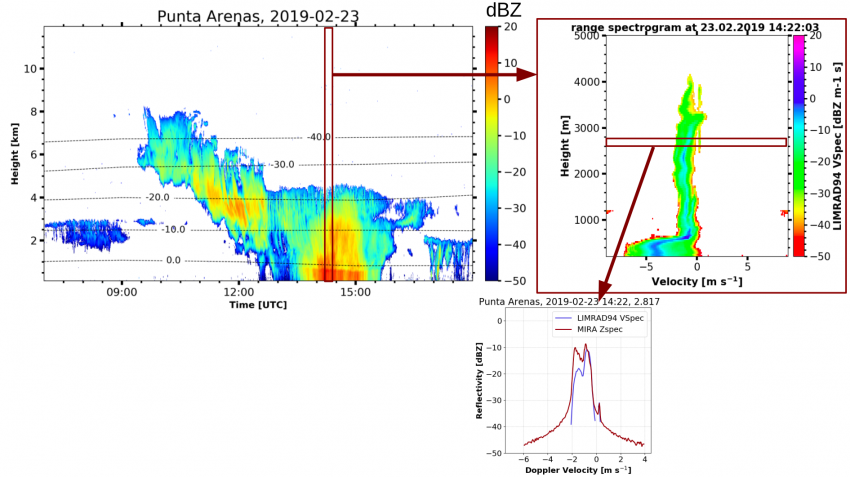 Figure 2: Example for riming signature evident in cloud radar Doppler spectra. The top left panel shows the radar reflectivity measured by the W-band radar on February 23, 2019 in Punta Arenas. In the top right panel, a range spectrogram at 14:22 UTC is plotted. The bottom panel shows Doppler spectra measured by the W-band (blue) and the Ka-band (red) at approximately the same time and range. Both spectra exhibit a narrow liquid water peak at around 0 m/s Doppler velocity.

The ICON model with the two-moments microphysics scheme, which was introduced by Seifert & Beheng (2006), is utilized to attribute observed differences in ice microphysical processes between the two sites. To make a comparison between modeled and measured clouds feasible, a forward operator is required. We are using the Passive and Active Microwave Transfer (PAMTRA) forward model (Mech et al., 2020; https://github.com/igmk/pamtra) to convert model output of one grid-box (the “meteogram” output for the location of Punta Arenas) to radar variables.

Main instrument for the contribution of TROPOS to PICNICC is the 35-GHz cloud radar Mira-35 which was operated SLDR mode in both campaigns. This mode is implemented based on the setup of a conventional LDR-mode cloud radar, with the receiving plane rotated by 45 degrees with respect to the plane of transmission. In comparison to the standard linear depolarization ratio, slanted linear depolarization ratio is considerably less susceptible to variations in the orientation of hydrometeors, enabling the determination of the hydrometeor shape and orientation from range-height-indicator (RHI) scans (Myagkov et al., 2016). During both field campaigns, Mira-35 performed RHI scans from 90° to 30° elevation once per hour (at minute 30). During the remaining time, vertical-stare observations were performed to enable the characterization of the overall evolution of the atmosphere.

The combination of the gradient of both SLDR and cross correlation coefficient for elevations from 30° to 90° permits us to differentiate the main ice particle shapes, as is illustrated in Figure 4 below. Considering in addition the fall velocity of the particles yields to a refinement in the differentiation between spherically shaped aggregates and graupel. 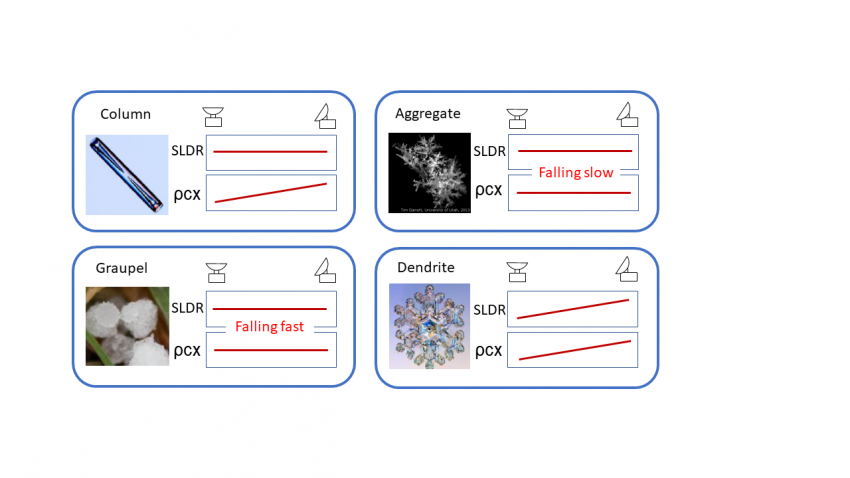 From the hourly SLDR-mode RHI scans of MIRA-35, profiles of the shape and orientation of particles can be derived for detected cloud layers. Figure 5 represents a specific case of mixed-phase cloud observed in Punta Arenas on 4th September 2019. For example, for the given positive gradient in both SLDR and cross correlation coefficient with decreasing elevation (increasing distance) informs us about the presence of dendritic hydrometeors. 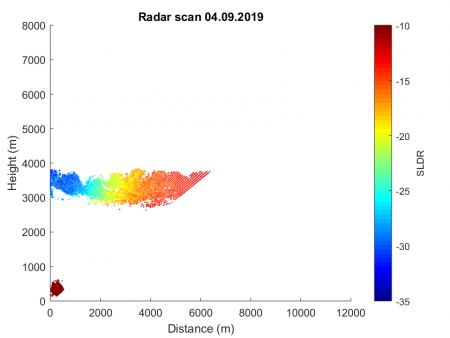 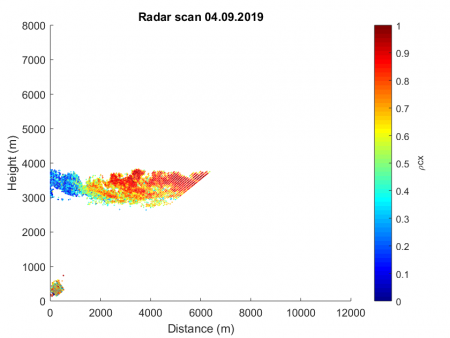 Figure 5: Observation of a mixed-phase cloud during an SLDR-mode RHI scan in Punta Arenas on 4 September 2019. (a) SLDR and (b) cross correlation coefficient.

From the long-term datasets of SLDR-mode RHI scans from Limassol and Punta Arenas, statistics of the vertical gradient of particle shape and orientation in the observed cloud layers will be studied and put into context with the overall atmospheric conditions as well as the aerosol load. Focus of the analysis will be put on the relationship of the microphysical evolution (i.e., the vertical gradient of shape and orientation) on aerosol conditions, with specific interest being put on distinguishing aggregation and graupel growth processes.