Joint project between
University of Bonn and University Mainz


Abstract
POLICE will exploit radar polarimetry for quantitative process studies in mixed phase clouds and for model evaluation. In-situ measurements of microphysical cloud parameters will be performed with the research aircraft HALO and the Falcon in the dendritic ice growth layer (DGL) and the melting layer below to evaluate targeted hypotheses on the origin of enhanced specific differential phase KDP in the DGL and quantify different indicators for the discrimination between aggregation and riming processes in the clouds. This will enable the set-up of a discrimination algorithm based on polarimetric weather radar measurements. Both the explanation of KDP-bands and the ability to distinguish between aggregation and riming is crucial for data assimilation and model microphysics above the melting layer. The in-situ measurements are used to evaluate the state-of the art retrievals of particle number concentration Nt, mean particle diameter Dm and ice water content IWC from the polarimetric radar signals and to evaluate the representation of particle type and size in the ICON-LAM model. The use of advanced spectral bin microphysical schemes in the Hebrew University Cloud Model (HUCM) in combination with measured cloud profiles will also give insights in processes responsible for potential deficiencies in ICON-LAM in order to enhance the representation of the cloud’s microphysical and radar derived properties in ICON-LAM.

Figure 1: Schematic of the methods and goal of the POLICE project: in-situ measurements of cloud microphysical properties will be evaluated along with polarimetric radar retrievals and cloud and weather models to investigate processes in mixed phase clouds.


Current status
The work in the first year addresses the evaluation of existing in-situ measurements of clouds for radar intercomparison (WP 1). In-situ cloud measurements performed during an overflight of the polarimetric radar station in Bonn (BoXPol) during the ECLIF2/NDMAX flight campaign in February 2018 have been evaluated. The horizontal reflectivity measured by BoXPol along the flight path of the research aircraft NASA DC-8 and the particle number concentration in the particle size range from 15 to 960 µm measured with the cloud imaging probe CIP onboard the DC-8 are shown in Fig. 1. The radar’s blind spot is marked in grey and the red line indicates the time when the radar scan was conducted. In the area close to the radar station a thick cloud layer with particles up to 700 µm in diameter was observed giving rise to the enhanced radar reflectivity. Further away from the radar station the observed cloud particles were smaller and below the detection limit of the radar.
The High Volume Precipitation Spectrometer HVPS has been ordered which will provide a better resolution of microphysical cloud properties detected near polarimetric radar stations in Germany (WP-2). A flight strategy is developed to augment the quality of the in-situ and radar intercomparisons in clouds. 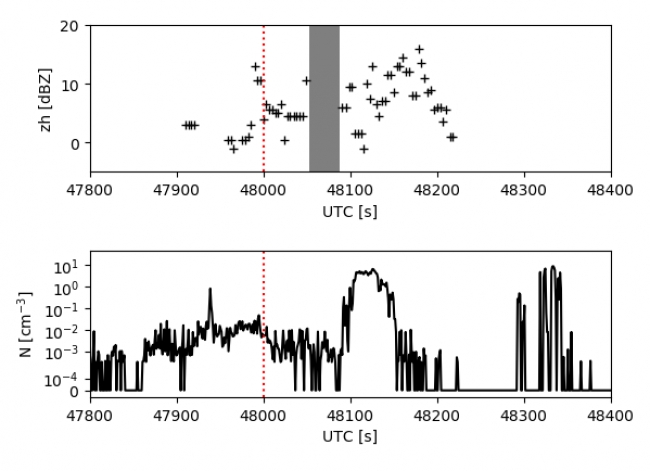 
Contribution of University Mainz
The contribution from the University of Mainz is focusing on airborne in-situ cloud particle measurements over polarimetric radar stations using so-called Optical Array Probes (OAPs). Hereby, microphysical cloud properties are extracted from two dimensional images recorded with OAPs inside clouds (see Fig. 3). During flight, cloud particles pass through a collimated laser beam and their shadows are projected onto a linear array of 128 photodetectors. The presence of a particle is registered by a change in light intensity on each diode. The registered changes in the photodetectors are stored at a rate consistent with the aircraft’s velocity and the instrument’s size resolution. Particle images are reconstructed from individual “slices”, where a slice is the state of the 128-element linear array at a given moment in time. A slice must be stored at each time interval that the particle advances through the beam a distance equal to the resolution of the probe (see Fig. 4 for the working principle of an OAP and recorded images of hydrometeors). Major work contributing to POLICE will be done with the High Volume Precipitation Spectrometer (HVPS), see Figure 3, which takes images of cloud particles in the size range from 150 µm to 1.92 cm. From the recorded 2D hydrometeor images, the cloud droplet number concentration, particle size distribution, median volume diameter can be derived. In addition, particles are categorized by hydrometeor type to distinguish between aggregation and riming of large ice crystals. Therefore, this measurement technique is promising to explain the origin of the enhanced specific differential phase KDP and to quantify indicators for the discrimination between aggregation and riming processes in polarimetric radar signals. 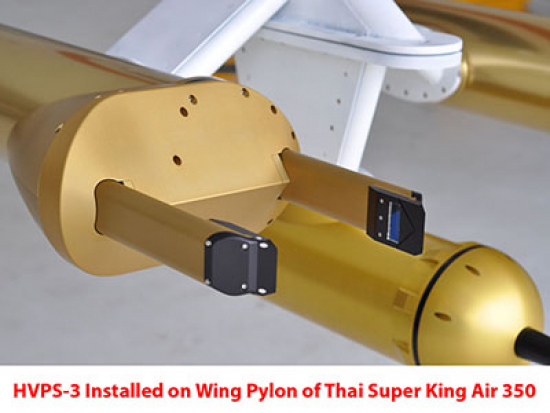 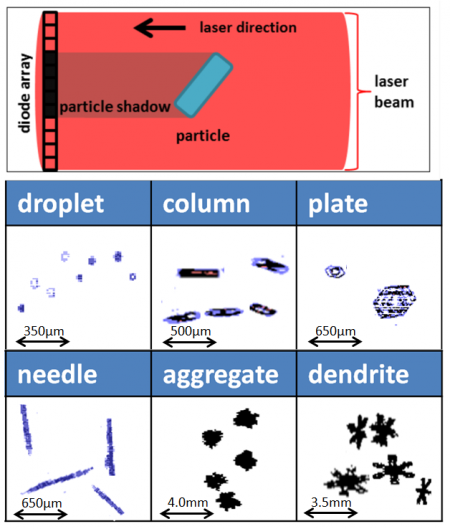