A seamless column of the precipitation process from mixed-phase clouds employing data from a polarimetric C-band radar, a microrain radar and disdrometers (HydroColumn)

Abstract The idea behind HydroColumn is to characterize precipitation processes inside a vertical atmospheric column by combining polarimetric Doppler weather radar observations with microrain radar (MRR) and in situ measurements. The C-band weather radar furnishes high-resolution polarimetric and spectral signatures of the precipitation aloft, while MRR and colocated in situ measurements allow tracking the precipitation down to the ground. The focus is the identification of ice- and mixed-phase precipitation processes above the melting layer which can then be related to atmospheric dynamics observed in wind and temperature profiles or modeled by numerical weather prediction models. 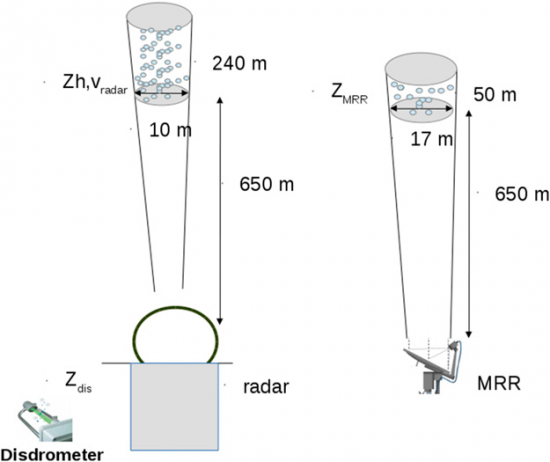 Our work during the first two years of the HydroColumn project has focused on (i) defining a (vertically pointing) birdbath scan strategy and implementing a flexible signal-processing methodology that allow a detailed analysis of C-band radar Doppler measurements and on (ii) exploring the benefits of combining C-band polarimetric measurements with such Doppler radar data and very short-term predictions from weather forecast model runs.

Birdbath scans for the 17 C-band dual-polarized Doppler radars of the operational DWD radar network have been routinely used for calibrating differential reflectivity (ZDR; Frech and Hubbert 2020). Within HydroColumn, we have updated the operational birdbath scan strategy to also allow for a meteorological interpretation of these vertically pointing Doppler measurements. To the scientists’ knowledge, DWD is the only meteorological service worldwide that currently derives Doppler spectra operationally from vertically pointing observations across the radar network. Figure 1a shows a summary of the radar output in one of the two polarization channels recorded for one birdbath scan with the DWD research radar at the Hohenpeissenberg observatory (MOHp) that is identical to the operational DWD radars. For a detailed interpretation of the radar data, the weather signal has to be isolated from the non-meteorological clutter and background signals, and the individual Doppler spectra should be checked for the existence of multiple precipitation modes representing different precipitation regimes. Within HydroColumn, we have developed a flexible algorithm to automatically identify and isolate the weather signal by leveraging unsupervised machine-learning techniques. Hierarchical density-based clustering (Campello et al. 2013) was used to cluster the radar output data based on the polarimetric characteristics of the Doppler measurements in the two orthogonal polarization channels (resulting in Figure 1b). By then applying a fast clustering algorithm based on the dip test of unimodality (Maurus and Plant 2016), statistically significant precipitation modes can be identified in the Doppler spectra at all height levels (Figure 1c). For each mode, relevant modal properties, such as radar reflectivity (Zh), mean Doppler velocity or mode width, are calculated and their uncertainties are estimated. If multiple modes are found, multimodal parameters describing the relative strength, separation, or mixing of the individual modes can be computed. The results then give a detailed profile of quantitative precipitation characteristics and uncertainty estimates. Figure. 1, for example, indicates one fast-falling precipitation mode (typical velocities faster than 1.5 m s-1 downward) and a slower-falling mode below a height of about 1 km, suggesting secondary ice processes associated with riming, which agrees well with in situ data collected next to the radar site.

Figure 1: (a) Summary of Doppler spectra in one polarization channel from birdbath scan recorded with the MOHp C-band radar during a winter precipitation event; (b) isolated weather signal, based on polarimetric characteristics and the developed machine-learning algorithm; horizontal dashed line indicates © one example of a bimodal Doppler spectrum, with peak intervals found by UniDip clustering and with final mode limits for calculating quantitative (multi)modal properties and uncertainty estimates.

Owing to the high flexibility in operating the MOHp C-band radar, e.g., for testing scan strategies or modifying range sampling intervals, we were able to carry out a combined measurement campaign of radar measurements and airborne in situ observations provided by the German Aerospace Center (DLR) Falcon research aircraft during the BLUESKY campaign (Voigt et al. 2021) within the PROM phase-1 POLICE project (Trömel et al. 2021). Figure 2 summarizes results from this campaign: high-resolution quasi-vertical profiles of polarimetric variables, vertically pointing Doppler measurements, short-term predicitions from the operational COSMO-D2 model (replaced by ICON-D2 in February 2021), and particle images collected in flight within a horizontal distance of about 20 km from the radar site and within 15 min of the radar measurements. Clearly, the polarimetric measurements already provide a great amount of information; the region of maximum ZDR and increasing Zh toward the ground approximately between altitude levels L3 and L4, for example, faithfully indicates the increased amount of preferentially horizontally oriented two-dimensional dendritic or plate-like frozen precipitation particles visible in the particle images around these levels. In the low-ZDR region sourrounding level L6, however, the polarimetric fingerprint alone does not provide a clear indication of whether the dominant precipitation process is aggregation or riming. Here, the Doppler measurements add valuable information, because the enhanced values up to about 1.8 m s-1 indicate a transition from aggregates to moderately rimed particles. The particle images tend to confirm increasing riming of polycrystals and aggregates, especially when comparing them to the level L5. Finally, we can see in Figure 2c that transitions between regions of characteristic features in the radar data also correspond to changes in (thermo)dynamic variables obtained from COSMO-D2, e.g., the transition to low ZDR is also marked by a spike in Doppler spectra standard deviation and a change in the atmospheric wind speed and direction around -7 °C. 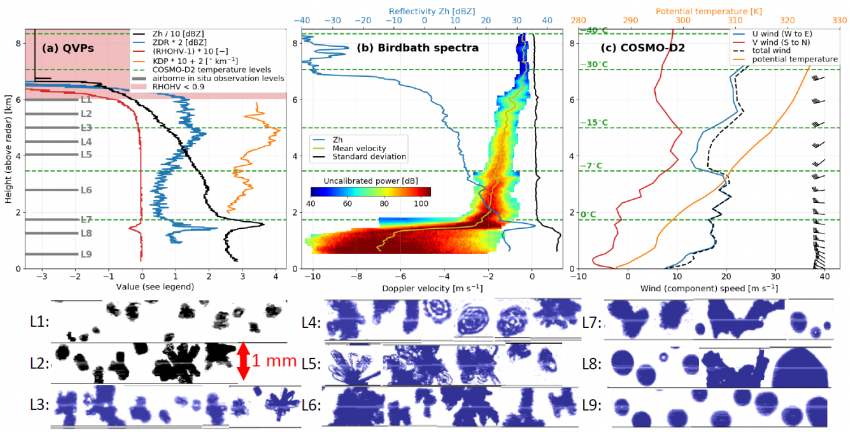 We have planned several upcoming combined measurement campaigns with DLR aircraft in situ observations where we will further investigate the co-variability of radar variables and weather forecast model outputs specifying the atmospheric (thermo)dynamics to characterize a more diverse set of precipitation conditions. Here, we also intend to build on first results for retrieving the rime mass fraction from the mean Doppler velocity (Kneifel and Moisseev 2020). In collaboration with TROPOS Leipzig, we continue to analyze the potential of using spectrally resolved C-band polarimetric measurements collected at various elevation angles for quantitative microphysical retrievals.


The work in the first year aims at implementing a measurement setup suitable for combined radar and in situ observations of precipitation at the Observatorium Hohenpeißenberg, with emphasis on identifying useful weather radar scan strategies for the polarimetric and spectral analysis of precipitation and on evaluating the information contained in the radar Doppler spectra.

While the signal processor of the weather radar applies a clutter filter that is useful for estimating polarimetric variables, such as Zh, ZDR, or RHOhv, for example, a detailed analysis of the full Doppler spectra requires a more refined isolation of the meteorological radar signal. The clutter characteristics also seem to be more variable than what is observed in some cloud radars (e.g., Williams et al. 2018), which poses an additional challenge. Figure 1a shows Doppler spectra of precipitating clouds observed with the vertically pointing weather radar at horizontal polarization. Here, a strong wind effect is observed (resulting in smearing of the spectrum across a wide range of Doppler velocities).

Doppler spectra near the ground (up to about 0.65 km above the radar) exhibit strong ground clutter; a strong clutter peak around 0 m/s is observed across most elevations; and some background noise can be noted. To isolate the meteorological signal in Figure 1b, a threshold filter was applied per velocity and height bin based on the difference between the Doppler spectra recorded at horizontal and at vertical polarization (DFTh - DFTh) combined with the small-scale variability of this difference (std(DFTh - DFTh)).

The threshold was selected based on results from a flexible, yet computation-intensive compared to simple thresholding, density-based hierarchical clustering algorithm (HDBSCAN; Campello et al. 2013) which does not require the prescription of a specific number of clusters or other characteristic features of the data clusters a priori (Figure 1c). The filter performance is not very sensitive to the exact threshold value, so the threshold value determined for one radar observation, as shown in Figure 1, can generally be applied to other radar observations during the same precipitation event and to different precipitation events. Changing the radar settings, however, can lead to a stark decrease in the performance of the threshold filter if the threshold value is not updated. 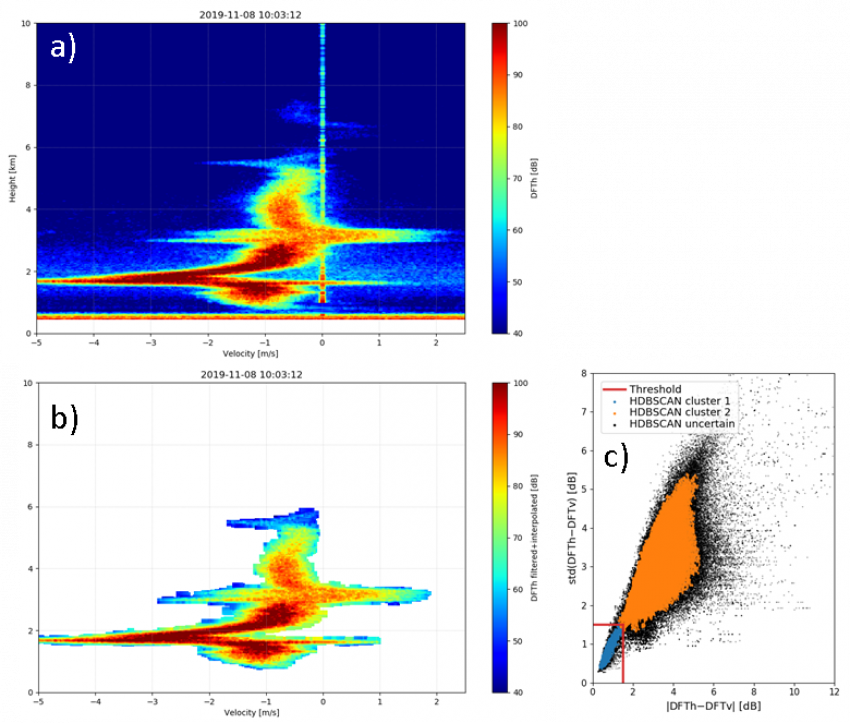 Figure 1: (a) Doppler spectra of precipitating clouds recorded with vertically pointing C-band polarimetrric Doppler weather radar at horizontal polarization. (b) The crucial step in isolating the meteorological radar signal is the filtering of Doppler spectra based on the difference in the recorded signals at horizontal and vertical polarization and its small-scale variability. © The filter threshold was derived based on results from applying the HDBSCAN density-based hierarchical clustering algorithm to the observations. Here, cluster 1 is interpreted as the meteorological signal, based on the assumed rotational symmetry in the horizontal plane (on average), and thus small differences between DFTh and DFTv, for a population of many scatterers within a radar bin; cluster 2 comprises near-field clutter, static clutter around 0 m/s, and background noise that all lead to either large differences between DFTh and DFTv (e.g. strong static clutter at 0 m/s) or highly variable values (e.g. background noise and transition regions from clutter to meteorological signal).

After exploiting the polarimetric characteristics of the Doppler spectra data to isolate the meteorological radar signal, typical features in terms of the shape and evolution of the Doppler spectra, as plotted in Figure 1b, can be identified and spectral moments can be calculated, similar to Williams et al. (2018), for example, which will form the next steps of the Doppler spectra analysis. Figure 2a shows examples of recently recorded Doppler spectra for a precipitation event where multiple spectral modes are clearly visible near a height of about 1 km above the radar, indicating the simultaneous occurrence of multiple microphysical processes during the formation of precipitation. Colocated in situ disdrometer observations at the ground indicated both frozen and liquid precipitation occurring simultaneously around that time which formed a one-hour transition period from (liquid) rain to (frozen) snow.

Figure 2: Doppler spectra recorded during two distinct phases of a precipitation event where the melting layer was located around 1500 m, just below the observed spectra. (a) Transition period from rain to snow, where both liquid and frozen precipitation was recorded at the ground. (b) Period of only (frozen) snowfall at the ground. Black ellipses mark potentially similar processes during the formation of precipitation; light gray ellipsis marks the fingerprint of a microphysical process only observed during the transition period, probably injecting liquid into the precipitation which persists down to the ground. Overall, Doppler spectra in (a) also show a stronger impact of wind (broadening of the Doppler spectra) compared to (b).

In addition to a more quantitative analysis of the Doppler spectra and their relation to the overall atmospheric dynamics at the time of precipitation, the next steps for the HydroColumn project also include an evaluation of the polarimetrc variables recorded in quasi-vertical radar profiles at 25° radar elevation and utilizing the radar data to (i) test quantitative microphysical retrievals in collaboration with TROPOS Leipzig and (ii) support airborne in situ observations of DLR measurement campaigns, for example.