Project based at the
Karlsruhe Institute of Technology

What causes heavy precipitation or large hail to form inside some thunderstorms? That is the principle question leading this research. A secondary question, “Why do some models predict these hazards well and others rather poorly?” is also considered.


To better answer these questions, a combination of state-of-the-art numerical modelling and dual-polarimetric radar observations are used in combination. Additionally, a new technique called “piggybacking” is being added to the numerical model to provide additional insight into the differences between cloud physics parameterizations. 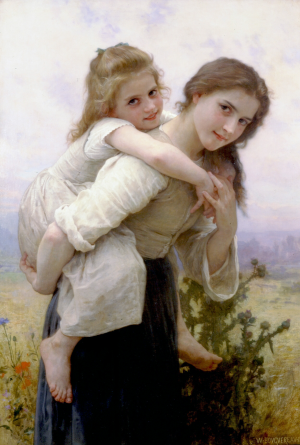 Model simulations of thunderstorms often show very large differences from reality (e.g. Varble et al., 2014) and also from other simulations performed with different models (e.g. White et al., 2017). The first part of this project will determine which parts of the model formulation contribute to the large differences between model simulations. To do this, the new “piggybacking” technique is introduced. Piggybacking allows multiple cloud microphysics parameterizations to be compared in a single model simulation and using the exact same air motions. Usually feedbacks via latent heating create very different air motions depending on the choice of cloud microphysics parameterization, which makes it almost impossible to meaningfully compare the parameterizations.

The new knowledge about which parts of the model formulation contribute to the between-model differences is then applied in the second part of the project. Here we will use this information to help make the model simulations more similar to reality. Radar observations - both traditional (e.g. reflectivity) and dual-polarimetric (e.g. differential reflectivity, differential phase shift) – will be compared to model output of the same quantities, which are derived from a forward model. The forward modelled outputs will be statistically compared to the radar observations for several days worth of simulations. With knowledge from the first part of the project, any biases detected in the simulations can be reduced through changes to the cloud microphysics.

Additionally, the most realistic simulations will be used to help explain the 3D distribution of the radar parameters – enabling us to determine the location of different hydrometeor types within the thunderstorm and the processes acting on the hydrometeors.

The end goal is to identify exactly which processes contribute to the formation of heavy precipitation and large hail. Additionally we will learn which parts of the model contribute most to the uncertainty when simulating thunderstorms. Therefore we can determine which processes need to be better described in the model and therefore which processes should be further studied so that the relevant parameterizations can be improved.

Figure 1: West-East cross-sections through a composite of simulated convective cells showing the relative locations of hydrometeor mass (grey shading), sources of mass (blue contours) and sinks of mass (red contours) for four different hydrometeor categories a) rain, b) graupel, c) hail and d) ice and snow combined. Storms are composited on their updraft location at 5 km, the updraft core is marked by grey line contours.

We first asked what the 3D structure of simulated convective cells looks like, and where in those cells do the relevant microphysical processes occur. We were particularly interested in which microphysical processes were responsible for producing extreme rainfall and hail in thunderstorms. Using a composite of simulated storms from the ICON model using the 2-moment microphysics scheme (Seifert & Beheng, 2006) we were able to answer these questions. In Figure 1, hydrometeor mass contents (grey shading), sources (blue) and sinks (red) are marked for three “microphysical pathways” (rain, mixed-phase and ice-phase pathways). Using this analysis, we determined that 80-96% of surface precipitation occurs via the mixed-phase pathway, where either graupel (Fig. 1b) or hail (Fig. 1c) stones form and grow by collecting supercooled liquid hydrometeors with which they collide (known as the riming process). These hydrometeors mainly melt before reaching the surface and are the origin of the rain mass far from the updraft (in Fig. 1a). Almost no surface rain was formed purely via collision and coalescence of liquid drops (the “warm rain” pathway) because the raindrops either freeze or are collected by frozen hydrometeors (riming) before falling from the updraft (Fig. 1a). Ice and snow remain suspended in the upper atmosphere (Fig. 1d) and do not contribute to surface precipitation at all. Performing similar analysis under different environmental conditions (increased wind shear, increased aerosol concentration) confirms the importance of the mixed-phase pathway and riming in various conditions.

The importance of the mixed-phase pathway, and in particular the riming process warrants further investigation. Using the piggybacking framework that we recently implemented in the ICON model, we perform experiments to further understand the increased importance of the riming process in comparison to other microphysical processes. We run realistic simulations where each of five microphysical processes is systematically varied. The riming process again shows the largest sensitivity out of all processes. Figure 2 shows the sensitivity of radar reflectivity histograms to parameterized riming rate (modified from a factor 4 decrease [left column] to a factor 4 increase [right column]). As the riming rate increases, there is a systematic reduction of high reflectivity points at all heights and an increase in the number of low reflectivity values especially above 7 km altitude. In the same simulations, the increased riming rate caused a significant increase in surface precipitation (due to the importance of the mixed-phase pathway, mentioned above). This highlights an interesting paradox: that modifying the riming rate can increase the surface precipitation while reducing the number of large hydrometeors in the atmosphere (and therefore reducing radar reflectivity).

Figure 2: Histograms of simulated radar reflectivity and height showing counts at each pixel in logarithmic units (3 = 10^3). The parameterized riming rate is modified in these simulations, with a scaling factor of 0.25 in the left column, increasing to 4.0 in the right column. The top row shows normal, fully coupled, ICON simulations whereas the bottom row shows piggybacked simulations, where the wind field is kept identical in each simulation. The similarity between the top and bottom row shows that microphysical processes are responsible for the differences seen, and that changes to the model wind field are relatively unimportant at these short time scales (differences between top and bottom rows are due to changes in the wind field) – a finding only possible using the microphysical piggybacking technique.

The insights gained from this analysis have allowed us to contribute to the development of the German Weather Service’s new ICON model configuration, developed as part of the SINFONY project. For the first time a 2-moment microphysics scheme will be used operationally; however, it was producing large biases in the vertical distribution of radar reflectivity and the frequency of high-intensity rainfall (>5 mm/hr). After reducing the parameterized riming rate within ICON, evaluation of simulations for 20 days in June 2020 showed a marked improvement. A substantial reduction of the bias (by more than half) of too frequent localised heavy precipitation was seen together with an improvement in the vertical distribution of radar reflectivity when compared to observations. We are continuing our work together to improve the ICON model’s representation of the 2D surface precipitation field and the 3D hydrometeor distribution.

The start of the project contained significant technical work with the ICON model. The piggybacking technique and a second microphysics scheme were both added. Testing these new developments in various setups has been performed. In an idealised setup, where convection is initiated by a warm bubble – the sensitivities of total rain amounts and total hail amounts reaching the surface are shown to differ in origin (see below). Work is now progressing on simulating real cases with ICON; the piggybacking technique is being used to understand the how two different microphysical parameterizations simulate convection on these days and what the main reasons for their differences are.


Sensitivity of surface precipitation and hail to modified cloud physics
Using the newly introduced technique of microphysical piggybacking, we examined the sensitivity of the surface total precipitation and surface hail accumulation to the cloud microphysics. We focused on changing the rate of autoconversion in the model – this is the rate at which small cloud droplets grow to be large enough to fall from the cloud as rain drops. An increased autoconversion rate means that rain forms more quickly inside the cloud and falls towards the ground, similarly the amount of water reaching higher levels in the cloud (which would be important for hail formation) is reduced. The autoconversion rate is a significant uncertainty in model descriptions of cloud formation. It varies with the aerosol concentration of the atmosphere and is parameterized differently across numerous models; White et al. (2017) found that is was a significant cause of inter-model differences in simulated convective clouds.

Changing the autoconversion rate and therefore forming rain more quickly also changes the distribution of heating and cooling within and underneath the simulated cloud. For example, the rain falling out of the cloud starts to evaporate below cloud base before reaching the ground; this cools the surrounding air producing so called “cold pools”. When rain is formed more quickly, the cooling through evaporation starts earlier and cools the air faster changing the shape and size of the cold pool. The contrasting density of the air within the cold pool and outside changes the three-dimensional flow – resulting in changes to the updraft strength or size. These changes in updraft lead to cloud formation in different places or times – which also change the temperature distribution. There is a continuous, unbreakable circle of interactions between cloud formation and changes in atmospheric circulation through heating changes. With piggybacking we are able to break the circle and attribute changes in the simulated clouds to either a) effects coming directly from the cloud microphysics, or b) effects coming indirectly from changes in the cloud microphysics via changes heating and cooling and therefore air motion changes.

The piggybacking methodology allowed us to determine whether the changes to surface precipitation and surface hail fall are more sensitive to the direct impact of changing the microphysics parameterization, or indirect changes via changing to the latent heating/cooling which affects the air motions. For surface precipitation, the direct impact of changing the autoconversion rate is largest whereas the feedbacks via the dynamics are much less important. For surface hail, both the direct and indirect effects are important.
Figure 2 shows the total precipitation and total hail fall from 5 sets of simulations. All simulations within one set have identical air motion. Within each set 5 simulations are run with different autoconversion rates. However, only one of the simulations – that marked with the black outline – is coupled allowed to modify the air motions through heating and cooling, the other simulations are piggybacked and only react to the changing air motions.

For the total precipitation (Figure 2, upper panel) the 5 sets of simulations are very similar. Within each set there is a systematic decrease of total precipitation with increasing autoconversion rate. This is a sign that the total precipitation is sensitive to the direct change of autoconversion rate, but almost insensitive to the change of air motions associated with changed latent heating and cooling intensities or locations. In contrast, the total hail fall (figure 2, lower panel) is sensitive to both the direct change of autoconversion rate (as shown by a systematic increase of hail with increasing autoconversion rate within each set) and also to the changed air motions associated with latent heating and cooling changes (as shown by the large set-to-set variability). Four out of the five simulations in Set 2 produce more hail than in any other setup – this is a sign that the air motions in this set of simulations particularly favors hail formation.
These first results indicate the potential of the piggybacking technique to help separate the direct and indirect impacts of changing specific aspects of the cloud microphysics parameterizations. This technique will now be used to systematically test different aspects of the model configuration and determine the sensitivity of the precipitation produced to changes in the cloud microphysics parameterization. 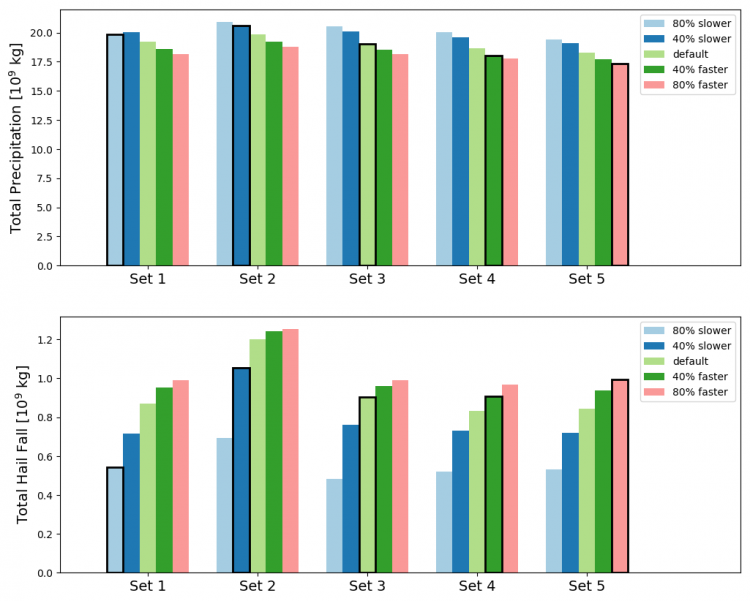