Abstract
The idea of PARA is to improve the representation rain originating from the ice phase in climate models thanks to the information provided by polarimetric radar. Specifically, PARA will make rigorous use of subgrid-scale variability to revise the parameterisation of four relevant processes (illustrated in the Figure) in the ICON atmospheric general circulation model. 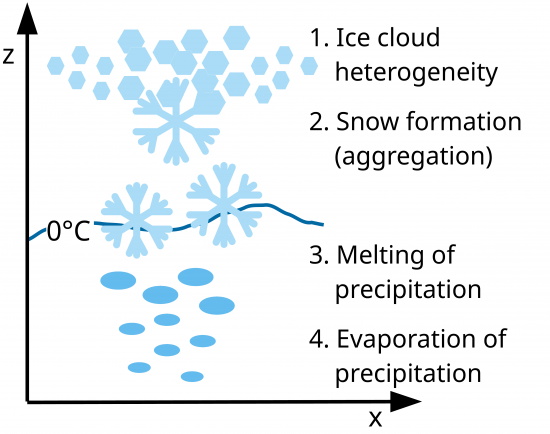 Current status
The work in the first year addresses the horizontal variability of cloud ice (WP 1) as well as accounting for this in the snow formation process via aggregation (WP 2).


Contribution of University Leipzig
A first goal of the Univ. Leipzig contribution to PARA was the evaluation of the subgrid-scale variability of cloud ice (Fig. 1, top). In the ICON general circulation model (Giorgetta et al., 2018), the cloud horizontal subgrid-scale variability is represented in terms of a “critical relative humidity” framework (Sundqvist et al., 1989) that corresponds to a uniform distribution of total-water specific humidity around its grid-box mean value (Quaas, 2012). In the present study, only ice clouds are considered, and the cloudy part of each grid box is isolated, i.e. the total-water amount that is beyond the saturation specific humidity with respect to ice.
From this, the variance of the subgrid-scale variability is computed (Quaas, 2012) and analysed at several isobaric levels. As a reference for the global distributions, satellite retrievals from the raDAR-liDAR approach by Delanoë and Hogan (2010) are used. From the high-resolved satellite data along the track within each 2.8° length, the variance of the ice specific mass is computed on the isobaric surfaces. The multi-year mean is compared to the ICON simulations (Fig. 2). The results show a relatively consistent geographical pattern between the model and the observations. However, some adjustments to the “critical relative humidity” parameter allow improving the simulation in the middle-to-upper troposphere. These new results will now be used to improve the representation of precipitation processes, and radar data will be used for an in-detail evaluation at a regional scale. 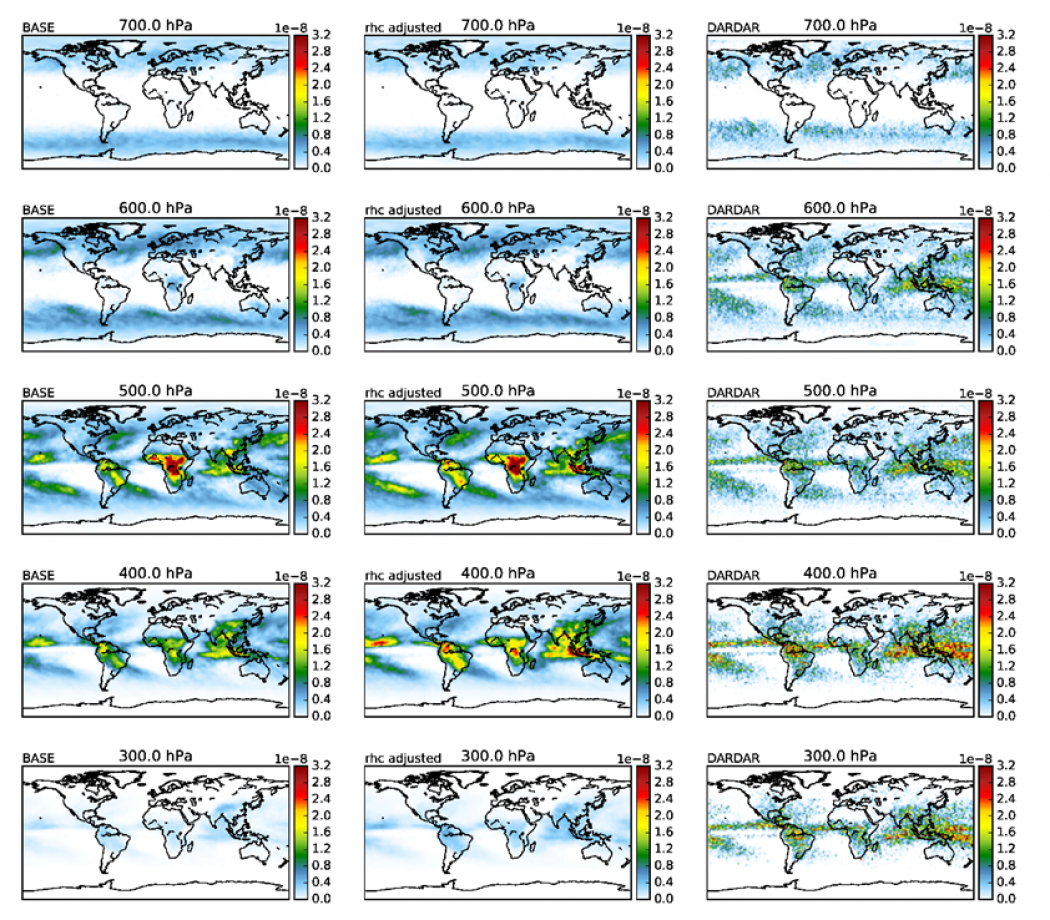 Contribution of University Bonn
At the University of Bonn the polarimetric radar measurements at C and X-band and the most recent ice microphysical retrievals (Murphy et al. 2018) for the ice particles number concentration N, the mean volume diameter Dm and the are used to investigate the ice variability above the melting layer. As an example Figure 3 shows for a rain event monitored with the polarimetric X-band radar in Bonn (BoXPol) the measured differential reflectivity ZDR and specific differential phase KDP in a time versus height display. Based on these measurements and horizontal reflectivity ZH, retrievals of number concentration Nt and mean volume diameter Dm are exstimated (Figure 4). Additional techniques are now implemented in order to disentangle statistical errors from spatial variability. Assuming an exponential distribution for ice particles aloft and distinguishing between cloud ice and aggregates/snow based on the smallest size a particle is assigned to snow in ICON-GCM (=100µm), observation-based retrievals of number concentration Nt, particle size Dm and ice water content IWC can, in extension to Figure 3, also be provided for ice and aggregates/snow particles separately. Together with the University of Leipzig, this information is subsequently used to assess the quality of the representation of cloud ice heterogeneity in the ICON GCM and suggest possible improvements. 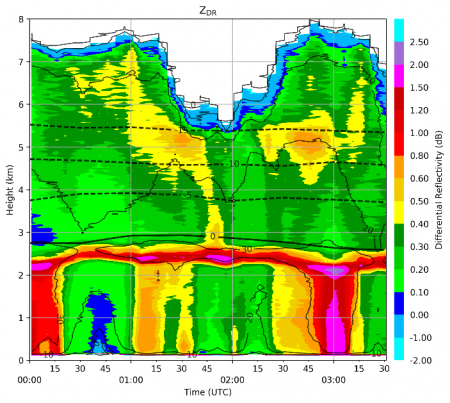 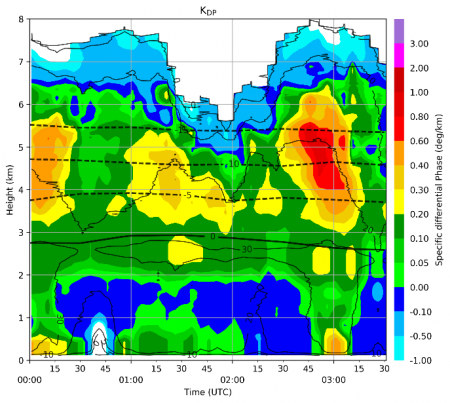 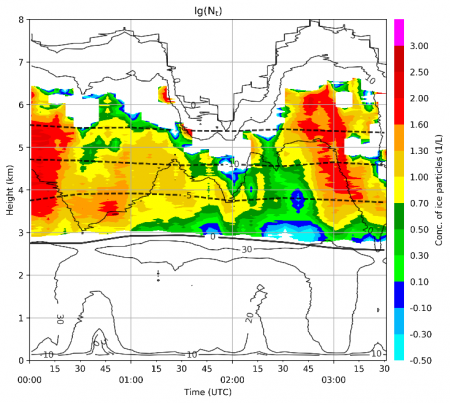 Ulbrich, C., Natural variations in the analytical form of the raindrop size distribution. Journal of Climate and Applied Meteorology, 22, 1764–1775, 1983.