Project based at the
Leibniz-Institute for Tropospheric Research (TROPOS)

Abstract
This project addresses the need to enhance knowledge about the distribution of hydrometeors in clouds during the onset phase of precipitation and its representation in numerical models. SPOCC proposes to derive estimates of the hydrometeor ratio of the above-mentioned particle types from spectrally resolved polarimetric Ka-band cloud radar observations as well as from a spectral-bin microphysical model. Basis for the work is the quality-assured dataset obtained during the Analysis of the Composition of Clouds with Extended Polarization Techniques (ACCEPT) field experiment (Myagkov et al., 2016b), during which co-located observations of a scanning hybrid-mode Ka-band and a vertical-stare LDR-mode cloud radar, scanning polarimetric S-Band radar, multiwavelength polarization lidar, Doppler lidar, and atmospheric radio-soundings were performed for the first time. ACCEPT was conducted in Cabauw, the Netherlands in fall 2014.

Current status
The work in the first year addresses the implementation of the analysis of bulk observations of the polarimetric Doppler radar observations (WP 1, observation) as well as the improvements of the ice part of the SPECS model (WP 2, modeling). 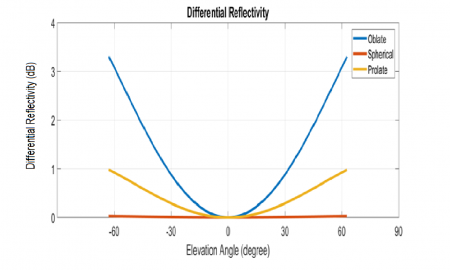 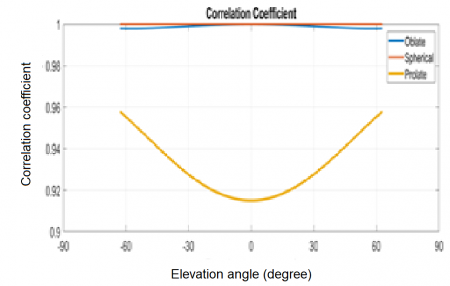 
Another step of the first project year was to familiarize with the observational datasets of the project which are the prerequisite for the shape and orientation retrieval. Fig. 2 shows range-height-indicator (RHI) scans of differential reflectivity and co-cross correlation coefficient as observed at Ka-band during ACCEPT (Fig. 2a) and with the scanning experimental C-Band precipitation radar of the German Meteorological Service (DWD) in Hohenpeißenberg (Fig. 2b) from which shape and orientation of hydrometeors can be retrieved. The gained experience in application of the shape- and orientation retrieval will in a sub-project be applied to observations of the weather radar network of DWD.
In the course of the project, the obtained results will be the basis for next step to evaluate parameterizations of cloud microphysical processes in collaboration with the modeling part of SPOCC.

Figure 2. Differential reflectivity and correlation coefficient for datasets from a) the ACCEPT campaign and b) from the experimental C-Band weather radar of DWD.


Contribution of WP2-Modeling
The first goal of the contribution to SPOCC was an extension of the ice part of the Spectral Microphysics (SPECS) model (Simmel et al., 2017). So far, we have tested the spectral-bin microphysical methodology called AMPS (Advanced Microphysics Prediction System; Hashino et al., 2006) to implement the habit and shape prediction of ice particles in SPECS. Until now, significant efforts have been underway to improve microphysical processes in AMPS, such as the schemes for immersion freezing and habit prediction. Despite these efforts, it is still challenging using modeling alone to resolve such complexity of microphysical processes due the large number of associated parameterizations and assumptions. In particular, the ice habit prediction system in AMPS is sensitive to the 3-D Eulerian advection scheme, such as COSMO. The steps are as follows. First of all, AMPS was coupled with a simple 1-D dynamic core KiD (Kinematic Driver for microphysics Intercomparison; Shipway and Hill, 2012). By doing so, we were enabled to compare the scheme with other microphysics schemes (i.e., Morrison 2-moment) (Fig. 3). In the next step, we will evaluate the simulation of a case study of a mixed-phase cloud system against co-located observational data from the ACCEPT campaign. In the course of the work, AMPS will be coupled with the German weather prediction system COSMO (Consortium for Small-scale Modeling; Baldauf et al., 2011) model. Also, we will use the radar forward operator CR-SIM (Cloud Resolving Model Radar Simulator) to translate the dataset of simulation output into radar variables. Therefore, we will directly compare the hydrometeor properties as obtained from the ground-based observations and from the modeling datasets. 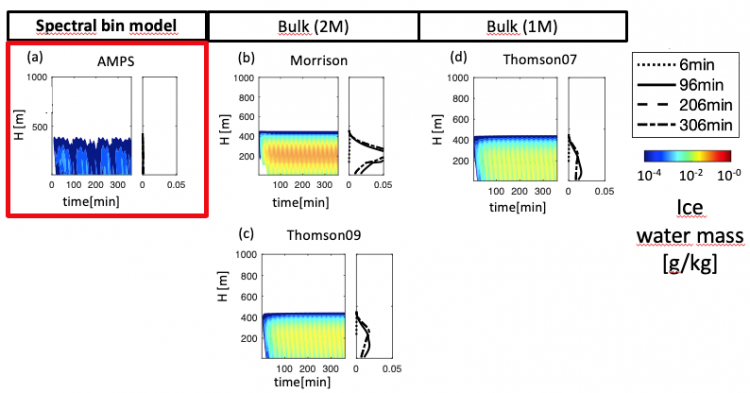 Myagkov, P. Seifert, M. Bauer-Pfundstein, and U. Wandinger. Cloud radar with hybrid mode towards estimation of shape and orientation of ice crystals, Atmos. Meas. Tech., 9, 469–489, 2016a.

Shipway, B. J., & Hill, A. A. (2012). Diagnosis of systematic differences between multiple parametrizations of warm rain microphysics using a kinematic framework. Quarterly Journal of the Royal Meteorological Society, 138(669), 2196–2211.