Abstract
Data assimilation (DA) on the convective scale uses high-resolution numerical models of the atmosphere that resolve highly nonlinear dynamics and physics. These non-hydrostatic, convection permitting models are in short runs very sensitive to proper initial and boundary conditions. The proper estimates of hydrometeors are crucial for prediction on convective scales. However, their estimation is hampered by assumptions made in data assimilation algorithms and in their models of the observation error and model error uncertainty. The aim of this project is to optimize the use of polarimetric radar observations to initialize numerical weather prediction (NWP) models due to the importance of this data set for the prediction of connective storms. This includes specifying the model error and the observation error for polarimetric radar data during data assimilation.

Direct assimilation of real polarimetric data in numerical weather prediction (NWP) models poses great challenges. This is due to a) the deficiencies in NWP models in representing the required spatial and temporal scales and all the physical processes of the observed geophysical state, b) a lack of knowledge in realistically modeling the necessary information required by a polarimetric radar observation operator, and c) due to deficiencies in current data assimilation (DA) algorithms.

Challenges caused by large representation errors (Janjic et al. 2018) and model errors, need to be quantified before the polarimetric data can be assimilated in the NWP models and DA algorithms need to be re-evaluated and improved.

RE: Representation Error due to unresolved scales and processes;
OE: Observation Error based on Desroziers statistics of ICON-D2-KENDA 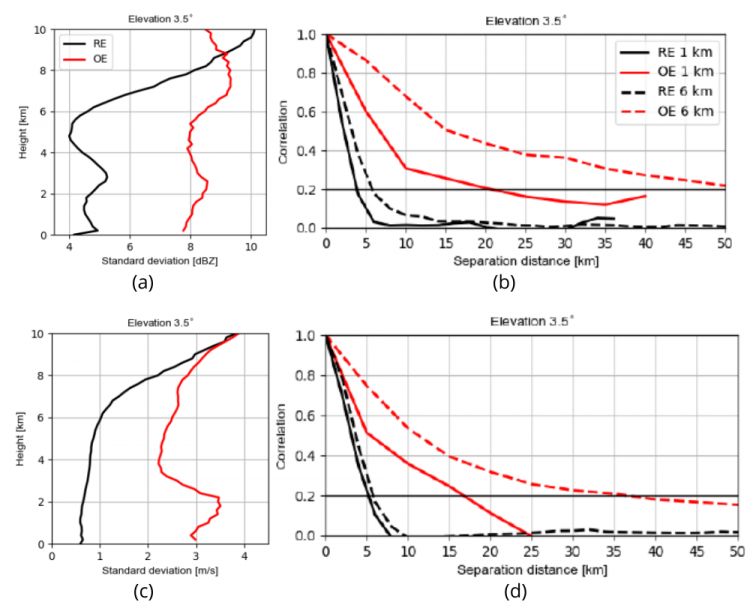 The statistics of Observation Error (OE) are calculated by the Desroziers method (Desroziers et al. 2005), using ICON-D2-KENDA (limited area ICOsahedral Nonhydtostatic model and Kilometar Scale Ensemble Data Assimilation system). Independent estimates of the error due to unresolved scales and processes, a part of Representation Error (RE), are calculated based on ICON-D2 model equivalents of radar reflectivity for a convective period in summer. For reflectivity, Figure 1a shows that standard devations of RE vary similarly as those of OE until 7 km, and Figure 1b shows that correlation length scales of RE and OE are not sensitive to different elevations, and correlations length scales of RE are shorter than those of OE. For radial wind, it is seen in Figure 1c that in addition to RE other errors contribute considerably at lower heights, and correlation length scales of RE and OE are shorter for higher elevations. It is found that the statistics of RE help the understanding of several important features in the variances and correlation length scales of the OE for both reflectivity and radial wind and the other error sources (e.g., from the microphysical scheme, radar observation operator and the superobbing technique) may also contribute. The obtained statistics can serve as a guideline for selecting which observations are assimilated and for assignment of the OE covariance matrix that can be diagonal or full and correlated.

Figure 2: The Fraction Skills Score (FSS) exceeding the threshold value 20 dBZ (left) and 30 dBZ (right) for the box-length of 70 km. Blue line are the results that include microphysical uncertainty and red line are without.


We also investigated the use of microphysical uncertainty perturbations applied only to hydrometeors (see Figure 2). Samples resulting from the difference between the ICON-D2 run with two- and one-moment microphysics scheme were created. These samples were used to perturb the hydrometeors during DA in classical formulation of additive noise. It was shown that the representation of the model error in microphysical state variables significantly improves 6-hour forecasts of radar reflectivity.


Figure 3: Left: relative changes [%] in the divergence of deterministic backgrounds (with marker ∘) and analyses during cycles compared to the nature run. Right: The Fraction Skills Score (FSS) values of reflectivity composite at 0.5o exceeding the threshold value 30 dBZ as a function of the box-length (from 4 km to 128 km). E_VrD: assimilating radial wind only; E_Z5D: assimilating reflectivity only; E_VrDZ5D: assimilating both


An idealized framework for radar data assimilation has been developed based on the COSMO-KENDA system, coupled with an Efficient Modular VOlume scanning RADar Operator (EMVORADO). It is shown in Figure 3 that the data assimilation could cause significant biased increases in divergence (also in vorticity and total specific mass of microphysical variables, not shown). Assimilation of radial winds leads to lower increases in divergence and vorticity, while assimilation of reflectivities leads to lower increases in total specific mass. The 6-h forecasts are skillful for both assimilating radial winds only and assimilating reflectivity only, while the latter one is even better (since the skills of the former one are heavily penalized for spurious convection). Overall, radial wind and reflectivity data complement each other, assimilation of both data simultaneously results in the lowest biased increase in divergence, vorticity and total specific mass during cycles and subsequently the best 6-h forecasts. 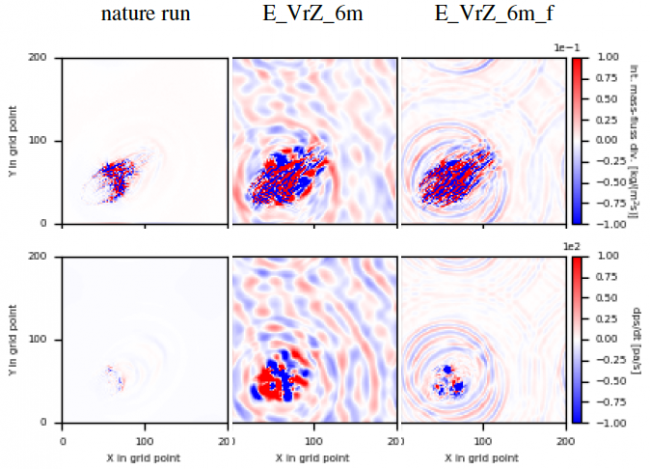 A new integrated mass-flux adjustment filter has been developed, which uses the analyzed integrated mass flux divergence field to correct the analyzed wind field. The filter has been examined with rapid update cycling using the idealized setup mentioned above. It is found that the new filter considerably diminishes spurious mass-flux divergence and the high surface pressure tendency (see Figure 4), and thus it results in more dynamically balanced analysis states.

In the recent work (Zeng et al. 2020), we have compared different methods to represent subgrid-scale model error (WP 1), including small-scale noise, the physically based stochastic perturbation (PSP, Kober and Craig, 2016) scheme for turbulence, and an advanced warm bubble approach. It is found that the combination of small-scale noise and bubble performed the best for the 6-h precipitation forecasts when assimilating radar data as illustrated in Figure 1, in terms of Fractions Skill Score (FSS). 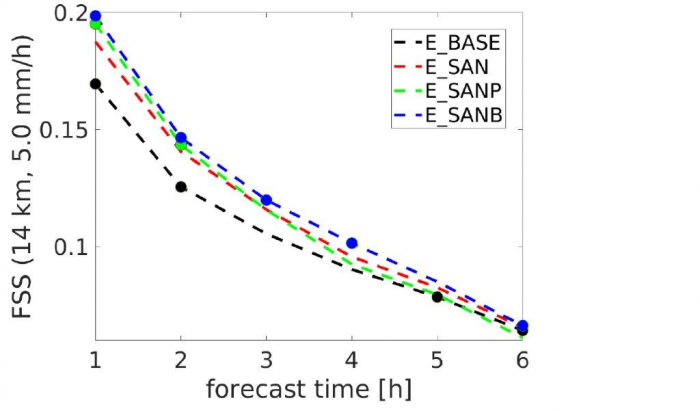 
Figure1: Verification of 6-h ensemble forecasts against radar-derived precipitation rate for comparison of using the FSS the for the threshold value of 5.0 mm/h as a function of forecast lead time for 14 km. The lines are marked with filled dots at the forecast lead times where the differences compared to E_SAN are statistically significant at 95% confidence intervals. In addition, the idealized setup for radar data (not polarimetric) assimilation based on the KENDA system of the DWD has been developed and tested (WP 3). See Figures 2 and 3. 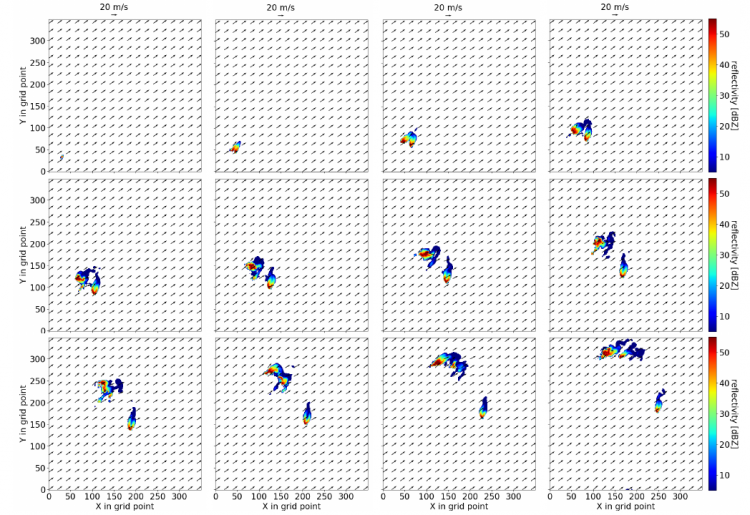 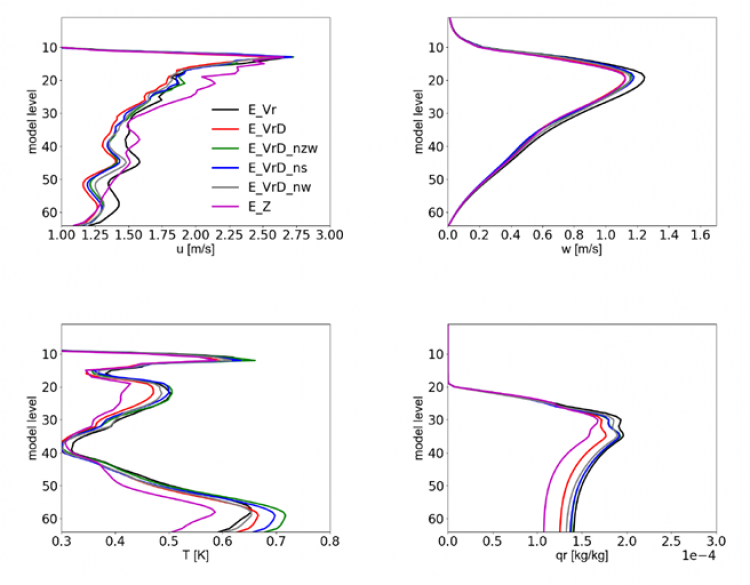 
Contribution of Yuefei Zeng
The problem of including the model error in data assimilation is twofold. First, the model error must be included in the data assimilation algorithm, and second, the error must be quantified through its statistics. In recent work, in order to represent the errors of unresolved scales and processes, we have produced COSMO runs with 1.4 km and 2.8 km horizontal resolution for a convective period (see Figure 3). These are used as samples in our new implementation of additive inflation that aims to mitigate small scale errors of COSMO. However, with these, we are not perturbing hydrometeors, but only horizontal wind, temperature and humidity (Zeng et al., 2019). Therefore, we are currently not examining errors in hydrometeors and in the microphysical scheme. Experiments with the second moment scheme and 1.4 km horizontal resolution will be carried out in order to obtain samples that include errors of the microphysical scheme. However, it is possible that additive inflation is not the optimal way to perturb hydrometeors. Therefore, other possibilities, such as perturbing parameters of the microphysical scheme will be investigated. 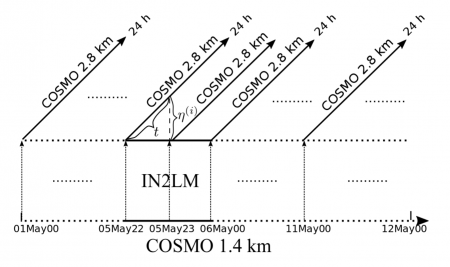 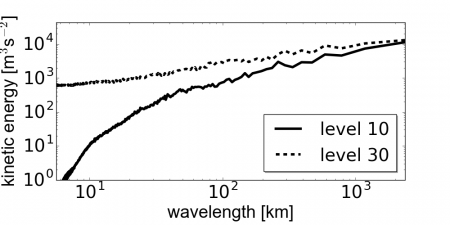 It has been shown that accounting for correlated observation errors leads to a more accurate analysis and to improvements in the forecast skill score (Weston et al., 2014; Bormann et al., 2016). Even the use of a crude approximation to the observation-error covariance matrix may provide significant benefits. However, the representation of spatial correlations is not straightforward. A number of approximated forms of spatial correlation matrices (or their inverses) have been proposed in the literature to increase numerical efficiency while preserving observation information content and analysis accuracy (Healy and White, 2005; Fisher, 2005; Stewart et al., 2008; Stewart, 2010). Since polarimetric radar observations have correlated observation errors, we will investigate this approach adapted to polarimetric radar data and modify LETKF accordingly.

Here we will use an idealized setup of COSMO–KENDA. Simulated observations of polarimetric radar data will be drawn from a nature run. By observing the truth, we can try to predict the location and intensity of the storms by using LETKF. Similarly, we will explore the use of retrievals, namely the drop size distribution (DSD) (Raupach and Berne, 2017; Brandes et al., 2004) which is an alternative approach to feed polarimetric information into the double-moment microphysics of the model. The benefits of including correlated observation errors will be investigated. By using different levels of microphysics schemes in the nature run and the assimilation, we will investigate the effects of model errors and how this behavior can be improved. 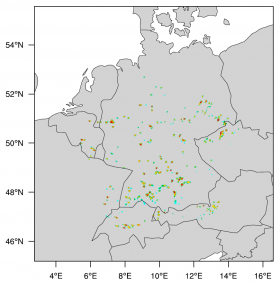 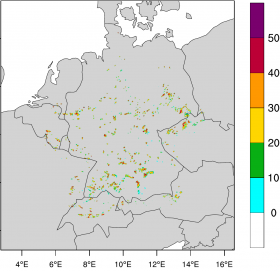 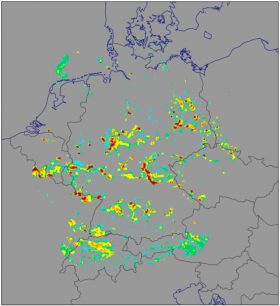 First, we will start with estimation of statistics of error due to unresolved scales and observation operator in idealized setups from higher resolution simulations. These will be compared with Desrozier (2005) estimates. Finally, the representation error will be parameterized . Grooms et al. (2014) suggest the use of stochastic physics for the mean and covariance of the unresolved scales. The use of the stochastic superparametrisation that is time varying improves significantly the results in their experiments. Although not design for the representation error statistics, we will explore stochastic parametrization of Sakradzija et al. (2016) for representation error of polarimetric measurements.